This last week Jim and I visited several State Historic Parks, all but one of which is on the closure list, and every one of them with some connection to John Bidwell. That’s because John Bidwell knew everybody (and I mean everybody) in California in his day.

Here’s where we went:

Leland Stanford Mansion in Sacramento: Stanford’s home when he served as governor 1861-1863. This is the house where Leland Stanford Jr, who died at the age of 15, was born and raised. The mansion is dressed to the nines in the most opulent and ostentatious Victorian fashion, but the rooms are small for the amount of decoration they have to carry. The house started as a small townhouse, then was expanded and then expanded again and again–more rooms were added, but the original rooms stayed small. Stanford even raised the entire house and inserted a new ground floor under the old one, adding a sweeping double stairway up to the front door. It is a gorgeous home, used by the state of California for receptions and other protocol functions.

Of course I didn’t think it was near as pleasant a home as Bidwell Mansion, but then Stanford was not near as pleasant a person. Both Bidwell and Stanford were deeply involved in state politics and the Republican Party. Stanford made Bidwell a brigadier general in the State Militia in 1863. That’s how he became General Bidwell.

State Capitol in Benicia: For one year, 1853-54, Benicia (next door to Vallejo) was the state capital of California. It has a fine old two-story brick building, with two Grecian columns at the entrance, where the legislature met. The columns are made from the masts of ships abandoned at San Francisco during the Gold Rush. Bidwell would have known many of the members of the legislature, having served as a state senator himself in San Jose in 1849-1850.

He had known Robert B. Semple, the founder of Benicia, ever since the Bear Flag Revolt.

Vallejo’s Petaluma Adobe:  General Mariano Guadalupe Vallejo had a vast 66,000 acre rancho stretching across Sonoma County and beyond, with headquarters at Petaluma. The adobe was bigger than I expected—a long two-story building with two wings, surrounding a courtyard where all the cooking was done. The sleeping quarters are upstairs, and the various workshops—the weaving room, the granary, the metalwork and tanning shops–are all downstairs. The wide verandas and simple furnishings really give the visitor a feel for life in old Alta California.

Bidwell knew General Vallejo very well, from the day that Vallejo signed his passport in 1841, until the last years of their lives. In 1846, when Vallejo was seized in Sonoma by the “Bears” during the Bear Flag Rebellion, he was sent to Sutter’s Fort and placed in the charge of John Bidwell. Later the military officer in charge of the fort told Bidwell that he was being too friendly with the prisoners, so Bidwell set off for Sonoma to join the excitement. He and Vallejo agreed that California would probably be better off under the government of the United States.

Fort Ross: This is the one that is not slated for closure. 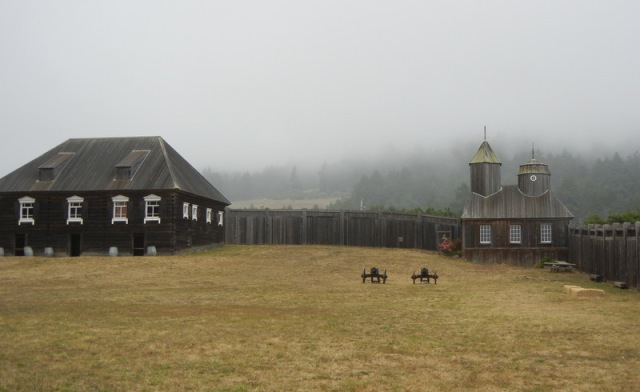 Bidwell lived here for 14 months in 1842-43. John Sutter had just arranged to purchase Fort Ross and all its contents from the Russians when Bidwell showed up in California. Sutter hired Bidwell as his clerk, and gave him the assignment of dismantling Fort Ross. I assume that all the cannons, muskets, tools, plows, etc. etc. that you can see here are not the originals, since all of those were sent to Sutter’s establishment on the Sacramento River back in 1842.

Now I’ve just got to get myself up to Ide Adobe before it closes.

Nancy is a retired librarian who lives in Chico, California. She is the author of John Bidwell: The Adventurous Life of a California Pioneer.
View all posts by nancyleek →
This entry was posted in Fort Ross, Uncategorized. Bookmark the permalink.

1 Response to Before They Close