Notice how the weather is getting cooler in October? We are currently enjoying lovely fall days, but the days are shorter and the nights are cooler. What if you were trying to get to California and hadn’t yet crossed the Sierras?  That could be dangerous, as the Donner Party would find out 5 years after the Bidwell-Bartleson Party.

On October 11th, 1841 the Bidwell-Bartleson Party was still crossing Nevada. They followed the Humboldt River (they called it Mary’s River) to the Carson Sink, where the river disappeared into swamp and sand. Then they struck westward and reached the Walker River (which they mistook for the San Joaquin.) Here is John Bidwell’s journal entry for October 11, 1841:

Monday, 11th. Left the lake this morning going into the mountains on a S.W. course. Today we left the trail of Capt. B. and having traveled 19 miles, arrived on a stream which flowed rapidly, and afforded more water than Mary’s river. We thought now, without doubt, that we were safe on the waters of the St. Joaquin (pronounced St. Wawkeen) according to Marsh’s letter. Here grew willows, balm Gilead, and a few cottonwoods.” 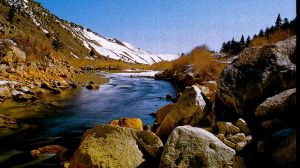 The Walker River made a good route up into the mountains, although future travelers on the California Trail would not travel this far south. In following the Humboldt Bidwell & Co. had missed the few miles of dry country that would have taken them to the Truckee River.

They still had three weeks of hard traveling ahead of them.