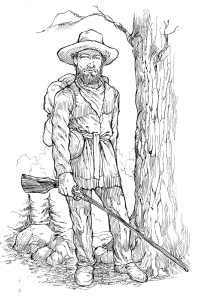 “Monday, 25th. Went about 6 miles and found it impossible to proceed. Went back about 2 miles and encamped — dug holes in the ground to deposit such things as we could dispense with. Did not do it, discovering the Indians were watching us . . .”

“Tuesday, 26th. Went S. about 3 miles and camped in a deep ravine. It was urged by some that we should kill our horses and mules — dry what meat we could carry and start on foot to find the way out of the mountains.”

Bidwell had rejoined the company after his detour to the grove of sequoias. While he was gone they had hired an old Indian to pilot them out of the mountains. They were sure that he had led them “into the worst place he could find” and then absconded. They suspected the Indians of wanting to get their horses for food, and they did not trust the guide.

When Bidwell caught up with his companions late on the 24th, they had abandoned 5 of the horses and mules that could no longer travel, and the Indians had taken them for meat. Now they had to consider whether it was time to kill the rest of the animals and travel on foot as lightly as possible.  They decided for the time being to keep their animals alive since, if nothing else, they were dinner on the hoof. How many of the men had mounts is unknown, but Bidwell was on foot.

Game was surprisingly scarce in the Sierra Nevada. All the deer must have been down in the valley, fattening on the lush grass. “When we killed our last ox [on the 22nd] we shot and ate crows or anything we could kill, and one man shot a wildcat. We could eat anything.”

They ate acorns, but the bitter tannin in the untreated acorns made them sick. Years later Bidwell could still vividly recall how he longed for good food, especially fat beef and bread.