Whatever Happened to Joseph Chiles? 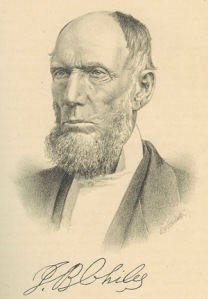 After all the hardships of six months on the California trail, to turn right around and do it again shows a full measure of fortitude and toughness. Joseph Chiles was a Kentuckian, born in 1810, who moved to Missouri in 1831 with his wife, Polly Ann Stevinson. She bore four children and passed away in 1837. When the Western Emigration Society formed in 1841 Chiles signed up to take the trail to California, leaving his four young children with relatives.

Chiles traveled all over California on his first visit and got General Mariano G. Vallejo to promise him a grant of land for a mill site in Napa Valley. Then he took the southern route back to Missouri to see his children. There he signed up his friend Billy Baldridge for the next California trip and gathered the machinery for a gristmill. With a party of thirty men, six women and a few children he set out, eventually passing through the Sierras by way of Walker Pass. Unfortunately, they had to abandon the mill machinery on the way.

Nevertheless, Chiles proceeded to Sonoma and showed his friend the nice little valley he had found on the eastern side of the Napa Valley. He got a grant of two leagues and named it Rancho Catacula. He fought in the Mexican War in 1846 and then returned once again to Missouri to collect his children in 1847. Not yet done with trekking back and forth across North America, he would make one more round trip in 1853-54. This time he met Margaret Garnhart and married her. Their first child was born on the trail in Nevada.

By this time he had built his gristmill, and when the Gold Rush came he resisted the temptation to go prospecting for gold, and instead prospered from the great demand for beef and flour. Although his fortunes had their ups and downs through the years, he lived to the good old age of 75, leaving behind a numerous posterity.

1 Response to Whatever Happened to Joseph Chiles?