Most people know that John Bidwell loved to eat melons, especially the casaba melons that he grew from Turkish seed sent to him by the U.S. Department of Agriculture in 1881. He ate them every day from summer until they ran out in December. Here is what his ranch foreman, George M. Gray, tells about the melons:

The next year we planted ten acres on casabas on newly cleared ground between the flume and the Humboldt Road where the vegetable garden and the Bidwell nursery was for several years. The ground was very rich and we had plenty of water from the flume and of all the melons I ever saw growing those were the best. 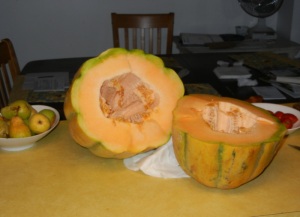 Bidwell sold the melons in town and to peddlers, and persuaded a hotel in San Francisco into taking them, until the hotel  decided that the melons were too large to make a handy serving. Overripe melons were fed to the hogs, and as Gray reports, “those hogs were said to be the sweetest pork that was ever sold in San Francisco.”

Bidwell made sure that he would have plenty of melons for himself.

Just before the first frost the General had a small slat building built back of the mansion under the trees with wide shelves on each side of the passageway, had straw put in the shelves, then filled with firm casabas and a light covering of straw on top.

Poor John! It would be six months before melons would be in season again.

Nancy is a retired librarian who lives in Chico, California. She is the author of John Bidwell: The Adventurous Life of a California Pioneer.
View all posts by nancyleek →
This entry was posted in Casaba melon. Bookmark the permalink.