With the Winter Olympics taking place in Sochi, Russia, now is a good time to look at the Russians in California. Although that’s not really my motivation; my inspiration comes from an excellent new book: Glorious Misadventures: Nikolai Rezanov and the Dream of a Russian America, by Owen Matthews. It is a long and detailed account of Rezanov’s adventures as an explorer and colonist in Siberia, Alaska, California and even Hawaii. 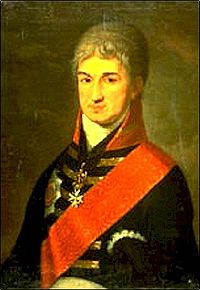 Nikolai Petrovich Rezanov was born in St. Petersburg in 1764. A nobleman of modest means, he rose through the ranks of the imperial bureaucracy by means of his energy, intelligence, and obsessive attention to detail. He was good with numbers, but he also knew how to make himself agreeable to those he wished to influence. He had all the attributes that would make him a rising star in the court of Catherine the Great.

In 1793 Rezanov’s fortunes turned to the east when he was appointed the court’s representative to keep an eye on Grigory Shelikhov, the “King of Siberia,” the John Jacob Astor of the Siberian fur trade, who had come to St. Petersburg seeking  permission to extend his ventures to Alaska.  Rezanov did more than supervise Shelikhov, he married his oldest daughter Anna. Nikolai was 32, Anna was 14, a not unusual age difference for that time.

It is difficult in this age of heated houses, heated cars, heated everything, to imagine how vital the fur trade was. It wasn’t just a matter of beaver hats being fashionable for men. Whether in Russia, China, Europe, or North America, people needed fur for comfort and survival. Fur was Russia’s “soft gold” and the trade transformed Russian from a minor kingdom on the fringes of Europe to a major power.

Today we might think of the wealth of Siberia as oil or minerals, but in the 16th-19th centuries, the lure of fur pulled explorers and adventurers into the depths of Siberia seeking fox, sable, and marten. The potential for making a fortune was real and compelling and Nikolai Rezanov was about to become a major player.

Nancy is a retired librarian who lives in Chico, California. She is the author of John Bidwell: The Adventurous Life of a California Pioneer.
View all posts by nancyleek →
This entry was posted in Nikolai Rezanov, Russian American Company. Bookmark the permalink.