Every so often I post an entry from John Bidwell’s diary on the Bidwell Mansion Association’s Facebook page, just to give folks a taste of what he was doing all those years ago. Here are three days from the end of March, 1871: 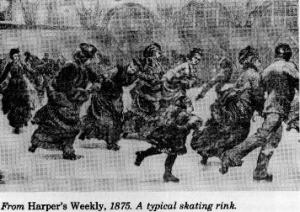 I don’t know whether it was ice or roller skating, but probably not ice–not in Chico. I would love to see John Bidwell on roller skates. Roller skating became quite the fad in the 1870’s, after James Plimpton invented the 4-wheel skate in 1863.

Maybe I’ll check the newspaper microfilm for the story of the poor Bryant children who were poisoned by toadstools. I surmise that Hannah Maloy was a servant at Bidwell Mansion. They often employed Irish maids.

And the children’s mother died too. Very sad.

Although almost all the artichokes grown in the U.S. today are grown in California, mostly in Monterey County, they must have been a new thing for Bidwell to grow in 1871. He was always experimenting with new crops.

What was Fulton’s Patent Plow? This was another of Bidwell’s experiments. The typical plow was drawn by two horses. In 1870 David Fulton, a vintner from Napa, invented a plow that could be drawn by one horse, making it possible to plow and plant rows of grapevines closer together. Ever the experimenter, Bidwell would have been quick to try out the new tool. The David Fulton Winery still exists and you can read more about the plow and other historical tidbits on their webpage.

Bidwell, of course, was not planting wine grapes. Annie forbid! But he had just planted table and raisin grapes at Sandy Gulch, so it is not surprising that he would be eager to try out the new plow.

Nancy is a retired librarian who lives in Chico, California. She is the author of John Bidwell: The Adventurous Life of a California Pioneer.
View all posts by nancyleek →
This entry was posted in agriculture. Bookmark the permalink.