Tuesday, June 22nd. Eight miles this morning took us to Fort Larimie, which is on Larimie’s fork of Platte about 800 miles from the frontiers of Missouri. It is owned by the American Fur Company. . . . The Black Hills were now in view; a very noted peak, called the Black Hill mountain, was seen like a dark cloud on the western horizon. The country along Platte river is far from being fertile and is uncommonly destitute of timber.

Wednesday, June 23rd. Remained at the Fort; the things of Mr. Shotwell were sold at auction.

More about the unfortunate Mr. Shotwell some other time. Bidwell didn’t have the spelling of Laramie right, but then, neither do we. The river is named after Jacques La Ramee, a French-Canadian fur trapper. The fort lay at the confluence of the Laramie River and the Platte in present-day Wyoming, and was the most important economic hub in the region.

All emigrants on the trail were happy to get to Fort Laramie, and the Bidwell-Bartleson Party was no exception. Arrival at the fort meant that the journey was one-third completed. It was an opportunity to trade for needed goods, get travel advice, and send mail back to the States.

There were actually three forts on this site. The first, called Fort William after its builders, fur traders William Sublette and William Anderson, was built of logs in 1834. The second, called Fort John after John B. Sarpy, an American Fur Company officer, was constructed in 1841 out of adobe bricks. Both were more commonly called Fort Laramie, and it was Fort John that John Bidwell saw when he arrived in June 1841, although it probably wasn’t complete.

In 1849, as the pressure of emigration grew in the West, the U.S. government decided it needed a string of forts along the Oregon Trail to protect and assist emigrants. With the fur trade in decline, the American Fur Company was looking to get rid of the fort. For $4000 the army purchased the site, and began building barracks, stables, guard houses, and cookhouses. The adobe fort, although only eight years old, was dilapidated and infested with vermin. It was used as temporary shelter by the army, but was soon torn down and replaced. 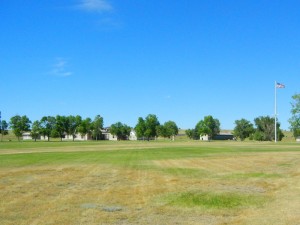 Today Fort Laramie is a national historic site and a number of the army post buildings have been reconstructed and restored. Nobody is sure exactly where Fort William and Fort John were located, but the best guess is that they were close to the river where the officers quarters are today.

Fort Laramie NHS is chock-full of history and well-worth a visit.