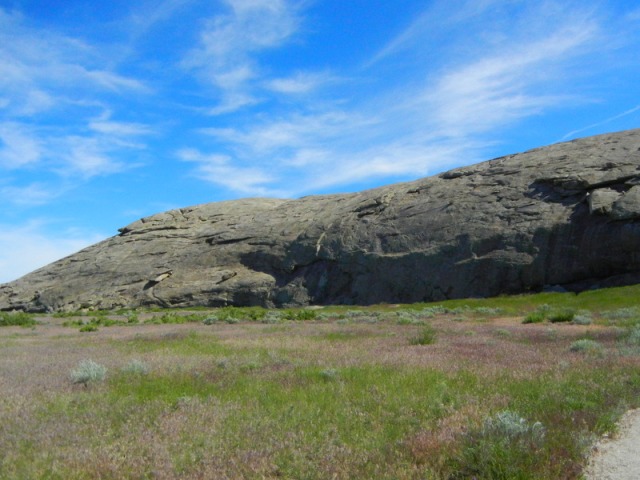 Monday, 5th. The hills continued to increase in height. After travelling 16 miles we encamped at a noted place called Independence Rock. This is a huge isolated rock covering an area, perhaps half a square mile, and rising in shape of an irregular obtuse mound to the height of 100 feet.

Father DeSmet wondered how the feature acquired such a “pompous name,” and thought it might be because of its isolated situation. But he was told that:

It was called so because the first travellers who thought of giving it a name, arrived at it on the very day when the people of the United States celebrate the anniversary of their emancipation from Great Britain.

It took its name from the celebration of the 4th of July at this place by Capt. Wm. Sublette, and it now bears many names of the early travellers to these regions.

Sublette, fur trapper and mountain man, gave the rock its name in 1830, as he led 81 men and 10 wagons to the Wind River to hunt for furs and trade with the Indians. It became, as Father DeSmet called it, the “Great Register of the Desert,” as countless trappers, traders, emigrants, and missionaries carved or painted their names on the rock. 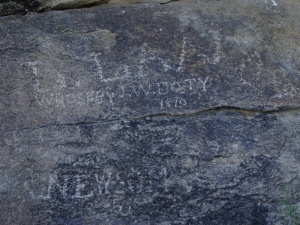 Today you can visit Independence Rock, walk the path around its base, even climb on it. (Watch out for mosquitoes–Wyoming mosquitoes are big and mean and I have the bites to prove it.) Hunt for names—the earliest I spotted was from 1890, but a careful search should turn up earlier ones. Many pioneers carved their names on the rock, but others only painted them with tar or grease, and those names have faded away. 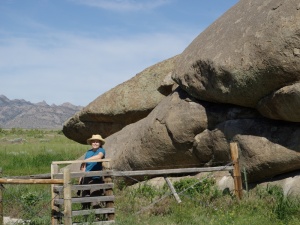 Enjoy the adventure! (Mosquitoes and all.)

Nancy is a retired librarian who lives in Chico, California. She is the author of John Bidwell: The Adventurous Life of a California Pioneer.
View all posts by nancyleek →
This entry was posted in Uncategorized and tagged Independence Rock. Bookmark the permalink.