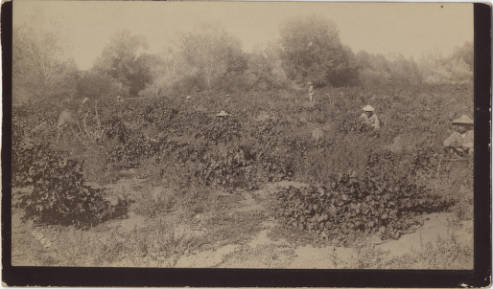 John Bidwell always had a need for workers — lots of workers, both skilled and unskilled. He had a diverse workforce — whites predominated, but he also had Indians, Mexicans and the occasional African-American.  Bidwell was willing to employ anyone who would do the job, but he was always trying to control expenses. He employed Chinese workers because they were generally hard-working, reliable, and cheaper to pay.

But they weren’t always happy with the lower pay. George Moses Gray, who was employed as the Rancho Chico orchard manager from 1880 to 1890, tells the following story about Chinese and Indian workers on the ranch:

All the time I was on the ranch we only had one strike. We let a contract for gathering and hulling the almond crop, at 3 cents per pound, dry weight. They (the Chinese workforce) had only worked half a day and had hardly got started [when they went on strike].

I went over and asked the General what I should do about it. After considering a while, he said, “Go down and talk with Noppaney and see if the Indians will do the job; the men can knock them and the boys and girls pick them up and the squaws hull them.”

They were glad to take the job and they did good work and we got the work done at just a little more than we were going to pay the Chinamen.

Nancy is a retired librarian who lives in Chico, California. She is the author of John Bidwell: The Adventurous Life of a California Pioneer.
View all posts by nancyleek →
This entry was posted in Chinese. Bookmark the permalink.