Continuing the recollections of D. F. Crowder. The following appeared in the Chico Enterprise for December 27, 1917. Crowder came to Chico in 1856, at the age of twelve, so he saw it before it was even a town.

Bidwell had a flour mill which was run by water power. It was located on the creek about a hundred yards from where the present Sperry flour mill stands.

Rancho Chico in the 1850s, with Bidwell’s Store, adobe house and hotel, and flour mill.

Both flour mills are gone today, but they stood next to the creek next door to where Northern Star Mills is today.

Flour was $1.75 a sack of fifty pounds, but no one kicked in those days. I used to see a good deal of John Bidwell. He was always busy with the ranch affairs and was seen very little about the hotel. He never was behind the bar himself, that I know of. Drinks we’re told were 25 cents each.

The hotel was Bidwell’s two-story adobe that he built after his log cabin burned down in 1852.

There was no bridge across Chico creek but there was a ford near where the present bridge now stands. The Shasta trail, now the Shasta road, lead off almost due north as it does now and it was black with immigrants — just like ants, coming and going. Some had ox teams, some were afoot and others drove mules. I don’t remember ever seeing a burro at that time. 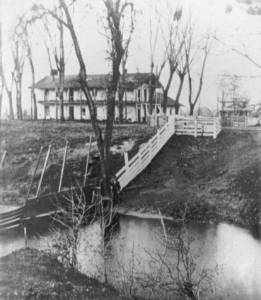 It must have been a busy place in those days with plenty of traffic and people stopping all the time at Bidwell’s house for a meal or a drink or a rest.