More about the Rancho Chico Map

This map has the name “B. Cussick, Agt” near the bottom. The name helps date the map. So who was B. Cussick?

Bernard Cussick, known as Barney, was born in New York state in 1848. In 1876 he came to California, and after a year in Eureka, he moved to Butte County as foreman with the Sierra Lumber Company. For almost twenty years he managed lumber mills in the mountains at Butte Meadows and at West Branch, becoming Sierra Lumber’s Chico division mountain manager in 1884. He was responsible for a number of innovations and improvements in mill operations and lumber transport. According to Andy Mark, in his book The West Branch Mill of the Sierra Lumber Company, Cussick was the first to use Dolbeer donkey engines and steam hoisting equipment in the region.

In 1895, due to poor health, he left the mountains and the lumber business and came to Chico to pursue a career in real estate.  He laid out and sold several tracts of John Bidwell’s Rancho Chico — the map was undoubtedly part of this promotion. Bidwell mentions meeting with him several times in his diary for 1898. He made for himself a successful second career in banking and real estate. Among his many deals, he was instrumental in promoting the sugar beet industry in Hamilton City. 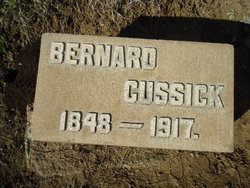 Barney Cussick died in 1917. His obituary in the Chico Record called him “a man’s man” and noted that he was “a man of brawn and rugged form, and rugged views of life; a man who fought his way from humble beginnings to a place of wealth and a director of large affairs. With his brawn he had brains, and with both, a heart.”

Barney Cussick’s name lives on as a street name — Cussick Avenue is on the north side of Chico and links Holly Ave. with Bay.

Nancy is a retired librarian who lives in Chico, California. She is the author of John Bidwell: The Adventurous Life of a California Pioneer.
View all posts by nancyleek →
This entry was posted in Barney Cussick, Rancho Chico, Uncategorized. Bookmark the permalink.

1 Response to More about the Rancho Chico Map