“Miners Would Go Miles to See It”

In 1853, John Bidwell couldn’t buy packets of seeds off a rack in store and he couldn’t order them from a seed catalog. So how did he get the seeds for his vegetable garden?

In 1851 and ’52 Bidwell had a young Bostonian named Nelson Blake working for him. Before he left home to try his luck in the goldfields, Blake had worked for his uncle raising vegetables for the Boston market, so he was well-acquainted with farming.

Nelson Blake wrote back East for seeds and they arrived in February 1852. Many years later he told his biographer:

The planting of these fresh, high grade seeds produced such a garden in the summer of 1852 that miners would go miles to see it.

And in a letter from Blake to Bidwell in 1884 he recalled:

The Summer following [the winter of 1851-52] was the one that we had the fine garden, when we raised the peach trees, and the immense crops of all kinds of vegetables.

The seeds would have come from open-pollinated varieties, what we would consider 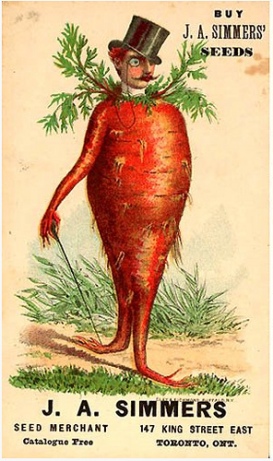 A vintage seed packet –much later than the seeds Bidwell planted in 1852 — but a cute picture.

Even after he returned to Boston, Blake continued taking an interest in farming at Rancho Chico, and he sent more seeds for the vegetable garden. In a letter dated July 17, 1853 he writes:

Enclosed in this I will send you some Rhubarb seed, of the kind called Imperial, Royal Superbiferous Giant. It is very large without exaggeration, the stalks of the plant that this seed came from were some of them two inches in width and as large very other way, proportionally. I think Rhubarb must be a splendid thing for you there, where there are no Apples raised, for it is an excellent material for Pies, Puddings and Sauces.

Don’t you wish you could get seeds to grow “Imperial, Royal Superbiferous Giant Rhubarb” today? Sounds fantastic. I can find no trace of it however.

If I can I will put in some Water-melon seeds before I close this up. They are a long, striped melon, they grew with us very large I sold one man in F.H. M’k’t twenty last Summer. He said they were the handsomest lot he ever saw together.

So that’s how vegetable gardening got started on Rancho Chico.

Nancy is a retired librarian who lives in Chico, California. She is the author of John Bidwell: The Adventurous Life of a California Pioneer.
View all posts by nancyleek →
This entry was posted in Gardening, Uncategorized. Bookmark the permalink.