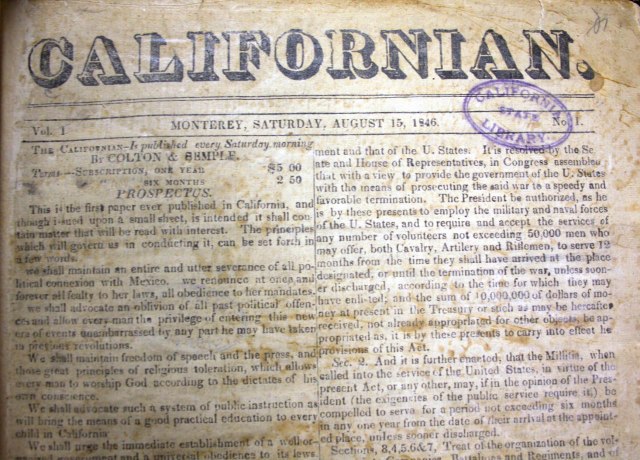 The first newspaper published in California, the Californian, appeared on August 15, 1846, 170 years ago today. The publishers were Walter Colton and Robert Semple.The first issue announced the declaration of war against Mexico by the United States.

Walter Colton, from Vermont, came to California by ship in 1845. He was a chaplain in the U.S. Navy and the first American alcalde of Monterey. His book Three Years in California is a classic in the literature of the Golden State.

Robert B Semple came over the California Trail in 1845 from Kentucky. He was active in politics and publishing, served as president of the first California Constitutional Convention, and held a Mexican land grant in Colusa County.

The Californian was a single sheet, with the news on one side in English and the other side in Spanish. It was published weekly in Monterey on cigarette paper, the only paper available. In 1848 it merged with Sam Brannan’s California Star in San Francisco to become the Alta Californian.