John Bidwell told his biographer Rockwell Hunt that during his early years in California he was an “incorrigible Democrat.” As a young man from Missouri, he naturally allied himself with the party of Andrew Jackson.  The Democrats were the party for the small farmer and the working man. Their opposition in the first half of the 19th century were the Whigs, the party of entrepreneurs and large land owners.

Later in his life he would become disaffected by the Democrats and change his allegiance, but during the 1850s he voted Democrat and helped to organize the Democratic Party  in California. In 1860 he was a delegate to the Democratic National Convention, where he supported Stephen Douglas for president, against the rest of the delegates, who were Southern sympathizers and supported Breckinridge.

The Democrats dominated California politics during the 1850’s. In the first statewide election on November 13, 1849 (although in reality California was not yet a state) John Bidwell was elected to the state senate, representing the Sacramento district. In December he went to San Jose and together with the rest of the new legislature began the process of building a state government. 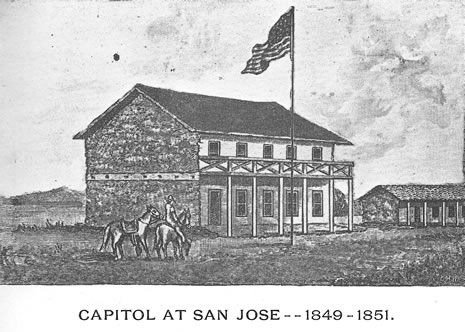 We had to frame a code of laws, and our constitution was almost a literal copy of the constitution of New York. A few members who had been able to get copies of the statues of N.Y. introduced nearly all the bills, and they were almost literal transcriptions of the N.Y. laws.  . . . I was head of the committee on corporations, also on the committee of county boundaries. I was chosen for this because I had more knowledge of the counties than perhaps any one else there.

I wrote the first charter of the City of San Francisco, for which the newspapers gave me great credit, but I didn’t deserve the credit, because I had copied it almost entirely from the charter of St. Louis. There was nothing very remarkable in getting up the code of laws.

And so began Bidwell’s political career in California. There was one earlier event – in August 1849 he was elected to the state constitutional convention.  But he never got the word of his election until it was too late. He hadn’t campaigned for the position, and in the summertime he was up in the hills, mining for gold. By the time he found out that he had been selected by voters to help write the constitution, it was too late to go to Monterey and take part.

Nancy is a retired librarian who lives in Chico, California. She is the author of John Bidwell: The Adventurous Life of a California Pioneer.
View all posts by nancyleek →
This entry was posted in politics. Bookmark the permalink.

1 Response to Bidwell the Democrat