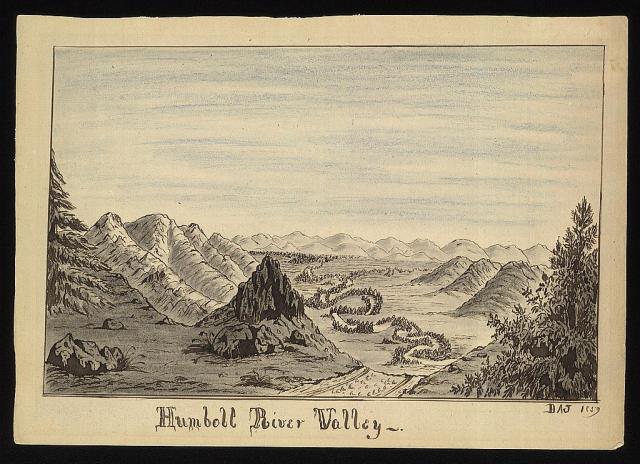 The Humboldt Valley, as drawn by Daniel A. Jenks in 1849

Tuesday, 5th.  Today was very warm, and the oxen were not able to keep up with the horses. Traveled about 30 miles and stopped on the river about dark – grass plenty, willows – this going so fast was the fault of Capt. B., nothing kept him from going as fast as his mules could possibly travel. But his dependence was on the oxen for beef – for it was now all we had to live upon.

Wednesday, 6th. Company was out of meat and remained till the oxen came up; several Indians came to camp, one of whom we hired to pilot us on.

On horses and mules, and half of them on foot, the Bidwell-Bartleson Party was making its way across Nevada along Mary’s River (the Humboldt River).  They were getting close to the Humboldt Sink, and by continuing to follow the Humboldt, they bypassed Truckee Meadows.

On the 5th it was Bidwell’s turn to drive the oxen, as he recounts many years later in Echoes of the Past. As Bartleson and his companions drove forward on their animals, Bidwell lagged behind with the slow cattle.

Not having had supper or breakfast, and having to travel nine miles before I overtook the party, perhaps I was not in the best humor. [Who would be?] They were waiting, and for the very good reason that they could have nothing to eat until I came up with the oxen and one could be killed. I felt badly treated, and let the captain know it plainly; but much to my surprise he made no reply, and none of his men said a word. (Echoes of the Past p. 127)

Imagine having to walk 2 or 3 hours through the rocky wilderness on no breakfast, looking for your flyaway companions. Imagine the others, sitting in camp, no breakfast, waiting for food to show up in the form of an emaciated ox that they would have to slaughter and roast before they could eat. It amazes me that this group did not have more arguments and divisions than it did, and furthermore, that they would all make it to California alive.

Just why Bartleson did not argue with Bidwell we shall see next time. He had a plan.