Friday, 23rd. Having no more meat than would last us 3 days [they had just killed their last ox], it was necessary to use all possible exertions to kill game, which was exceedingly scarce. For this purpose I started alone, very early in the morning, to keep some distance before the Company . . .  I went about 4 miles –met the Indian who came to us last night — obtained a little provision made of acorns — got an Indian boy to pilot me to his house. [How did they communicate with the Indians?] He took me down the most rugged path in all nature — arrived on the banks of a river at least 3/4 of a mile perpendicular from where I started with him — found no more provision, continued down the river . . .

The mountains, which walled in the stream, were so steep that it was with great difficulty I scaled them — having in one place come within an inch of falling from a craggy cliff down a precipice nearly a fourth of a mile perpendicular. 4 long hours I labored before I reached the summit — proceeded directly to intercept the trail of the Company. Mts. covered with the largest and tallest pines, firs, &c., thick copses of hazel &c. — travelled till dark over hills, dales, crags, rocks, &c., found no trail — lay down and slept.

You would think that Bidwell would take someone else with him, but he doesn’t seem to have heard of the buddy system. His idea was to range around looking for game to shoot, then rejoin the Company further down the trail. Needless to say, he never found any game, and the others weren’t doing much better. In Echoes of the Past he says:

When we killed our last ox [on the 22nd] we shot and ate crows or anything we could kill, and one man shot a wildcat. We could eat anything.

Although he found no game, he did make a fascinating discovery.

Just at dark I came to an enormous fallen tree and tried to go around the top, but the place was too brushy, so I went around the butt, which seemed to me to be about twenty or twenty-five feet above my head. This I suppose to have been one of the fallen trees in the Calaveras Grove of Sequoia gigantea or mammoth trees, as I have since been there, and to my own satisfaction identified the lay of the land and the tree. Hence I concluded that I must have been the first white man who ever saw the Sequoia gigantea, of which I told Fremont when he came to California in 1844. (Echoes of the Past)

You can read more about John Bidwell and what is today Calaveras Big Trees State Park here. 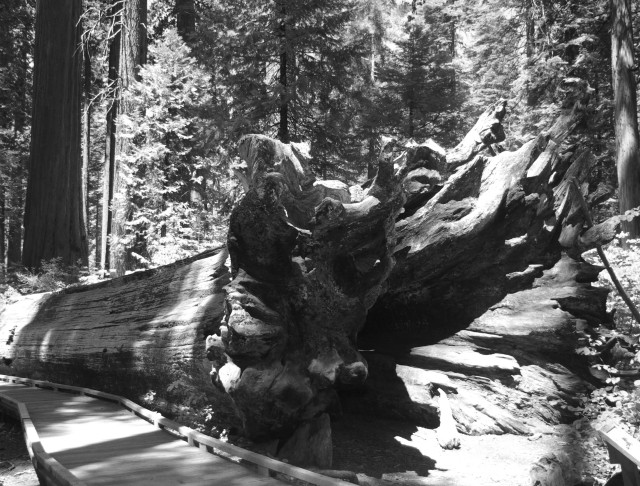 The Father of the Forest, as it appears today.