The year 1847 ended with the greatest expectations and it seemed that the following year would crown my success. Around my dwelling, whose doors were never locked, the former wilderness had changed into gardens and large fields of various kinds of grain. The antelope and deer had been replaced by large herds of cattle and horses which grazed unhampered and unguarded. Even the wild Indians appeared to be not unimpressionable by culture and civilization. With my Indians I always lived in peaceful and harmonious relations. What they lost by my cattle as to acorns, grass seeds, etc., I replaced with wheat, corn, melons, etc., which I planted and shared with them.
Almost in all directions I now had neighbors, so that the social relations were considerably improved. In addition, I enjoyed the greatest freedom which any human being could enjoy and was frequently in a position to give the deciding vote in a judgment over life and death. Then gold was found in my district and my great hopes came to naught.

So wrote Theodore Cordua in his memoir of life in California. His hard work and energy had paid off. He had a large successful ranch, far-reaching business interests, good neighbors, and above all, freedom to act as he pleased.

He wrote to friends in Germany, recommending that they come to California and share in the bounty. But his invitations went unheeded, although he was ready and willing to help any German immigrants with land, cattle, and implements. He later lamented:

Had I had only a few honest Mecklenburgers in my employ or in my district for neighbors! How we could have been the happiest and richest people, not by digging for gold but by the possession of land, by agriculture, and cattle raising!

The dreams of founding a German colony in the Sacramento Valley, and the reality of his prosperous agricultural empire, all came crashing down with the Gold Rush. His employees ran off to the goldfields, but he felt constrained to stay at New Mecklenburg and guard his holdings. Goldseekers flocked to his ranch, ate his food, burnt his fuel, destroyed his land.

He decided what he needed was a partner, someone to help him hold down the land and supply cattle to the mining camps. He went into partnership with Charles Covillaud, a Frenchman whom he had formerly employed as a cooper. Covillaud had a trading post where he sold goods to miners and Indians, which would provide a market for Cordua’s beef.

In 1848 Charles Covillaud married Mary Murphy, a survivor of the Donner Party, and named the town that grew up on Cordua’s ranch Marysville, after her. She was 17 when she married Covillaud, and it was her second marriage (but that is a tale for another time.)

Looking to get out from under the burden of his failing ranch, Theodore Cordua sold the other half to Michael Nye (who had come to California with John Bidwell) and William Foster. Taking the profit, he became once again a merchant and bought goods to sell in the goldfields. He also had high expectations for his lots in Suttersville. Less subject to flooding than Sacramento City, Suttersville was poised to prosper as a gateway to the gold regions, but it never took off, and his investment was worthless. 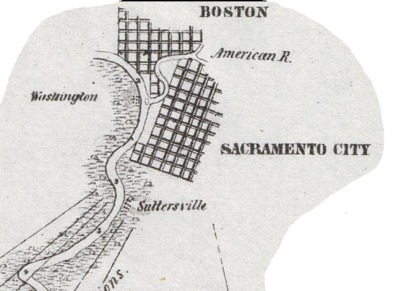 Everything went wrong for Cordua. Gold deposited in a bank was stolen, his trading post on the Yuba River burnt to the ground, fires in San Francisco destroyed other buildings, mules and horses disappeared, expenses were high and debts went unpaid. He took to drink, wandered from place to place looking for opportunity, and despaired of ever again finding wealth in California.

He finally gave up on California in May 1852 and took ship for Honolulu. He lived in Hawaii for several years, and then returned to Germany in 1856. There he dreamed of starting anew in some foreign land, perhaps at Vancouver Island. But before he could journey again he died in Germany in October, 1857. He was 61 years old.