A Visit to the Society of California Pioneers

The Society of California Pioneers is a small organization with a big history and an impressive research library. Yours truly likes nothing better than an afternoon spent in a research library, so last Thursday I visited Pioneer Hall in San Francisco.

The Society of California Pioneers has moved house several times since they were founded in 1850 and are now located in one of the brick barracks at the Presidio, just down the street from the Walt Disney Family Museum. You could go to the Presidio for nothing more than a picnic and the views of the Bay and the Golden Gate Bridge, and have a thoroughly enjoyable time, but there is much more to do and see.

The SCP has a small museum with changing exhibits — you can check their schedule here. They also have a library with one room of books and a couple more of archives and manuscripts. The library is open by appointment only. 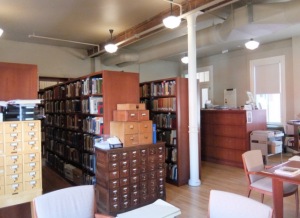 The Library reading room and stacks

The SCP was founded in 1850 by a six men who had come to California before the Gold Rush. The original aims of the Society were “to cultivate social bonds, to collect and preserve information related to California history, and to perpetuate the memory of early pioneers.” Membership was limited to men who arrived in California before 1850. The Society is now open to both men and women who are descendants of pioneers. 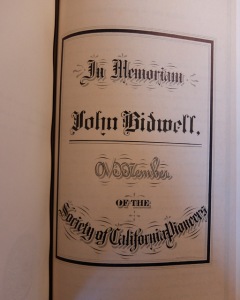 The Society was diligent in preserving the memory of those early pioneers. They collected autobiographies and recollections of early days, and those records are available online. John Bidwell’s address to the Society was one of the best sources for my book.

They maintained obituary records, in which they memorialized their most prominent members with lengthy tributes, and a mortuary record, which recorded the death of each member. They also have letters, deeds, and other manuscript material on many members.

I was looking for anything on John Bidwell, John Marsh, or Dr. John Townsend. Although there was not a large amount on any of these men, I found several choice tidbits. In the case of Dr. Townsend, not only was he a member, having arrived in 1844 with the Stephens-Townsend-Murphy Party, but his son John, who was born in San Francisco in 1848, also qualified to be a member. He must have been the youngest one among the senior pioneers. 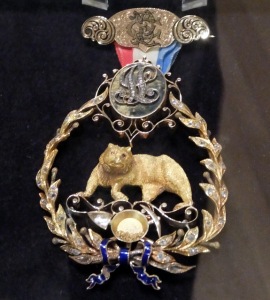 The President of the Society gets to wear this fantastic medal at their annual dinner. It was donated by the philanthropist James Lick, who was an early member.

Nancy is a retired librarian who lives in Chico, California. She is the author of John Bidwell: The Adventurous Life of a California Pioneer.
View all posts by nancyleek →
This entry was posted in Society of California Pioneers. Bookmark the permalink.

2 Responses to A Visit to the Society of California Pioneers