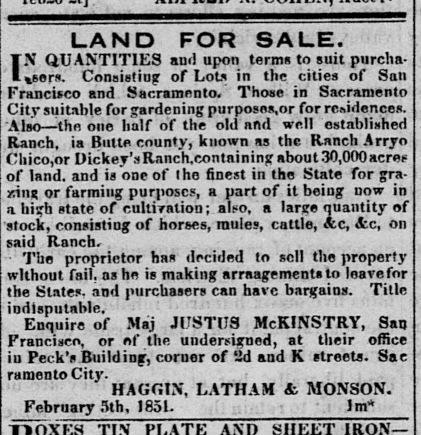 You might look at this advertisement from the February 6, 1851 Sacramento Transcript and wonder who was Justus McKinstry and why was he selling half of Rancho Chico, because didn’t that already belong to John Bidwell? Here is the story behind the ad—

William Dickey was an Irishman who came to California a couple of years before John Bidwell. I’m not sure of the year, but he was in California in 1840 during the Graham Affair. He worked for John Sutter (didn’t they all) and it was Sutter who suggested that Dickey and Edward Farwell go exploring up the Sacramento Valley, beyond the limits of Sutter’s own vast land grant.

They came to a beautiful stream and named it Chico Creek. The spot had everything to recommend it, and they decided to ask for five leagues each on either side of the stream. They tossed a coin to decide who would get which tract, and Dickey won the north side, while Farwell got the south side.

They returned to Sutter’s Fort where they told their comrade John Bidwell about their wonderful find and their desire to take possession of that spot. Not long after Bidwell himself traveled up the valley to Chico Creek and admired its beauties. Later that year (1843) Dickey and Farwell petitioned the Governor for the land, which was granted to them in November 1844.

So Rancho del Arroyo Chico became commonly known as Dickey’s Ranch. And California was so new that a 6 or 7 year old ranch could be called “old and well-established.”

Tomorrow: The Rest of the Story

Nancy is a retired librarian who lives in Chico, California. She is the author of John Bidwell: The Adventurous Life of a California Pioneer.
View all posts by nancyleek →
This entry was posted in Uncategorized, William Dickey. Bookmark the permalink.