Nicholas “Cheyenne” Dawson spent about a year at Santa Cruz keeping store and supervising the shipping of redwood lumber for Job Dye. The business wasn’t making money, so Dye closed the store. He decided to try otter hunting instead and offered Dawson a job as a otter hunter. 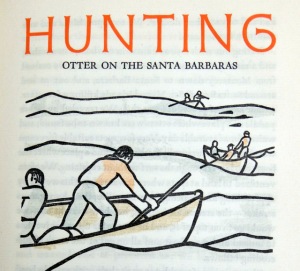 Dawson was no seaman, but he was game. Dye built three 15-foot boats, and manned them with three men each. Dawson was the hunter in the bow of one of the boats. They sailed down the coast from Monterey to Santa Barbara and began hunting around the offshore islands. Their procedure was to surround a raft of otters and begin shooting them, and then collecting as many as they could. (I assume dead otters float.)

Otter hunting is a very exciting business, and somewhat dangerous, as you are apt to think when you hear a bullet whistle past you, it having glanced from a wave as it came from a hunter’s gun opposite, who had shot at an otter on a line between you and him. But these risks will be run for an otter skin, worth thirty dollars. and especially when there is rivalry among the hunters.

Thirty dollars in 1842 would be about $500 today, which certainly would make otter hunting a lucrative business. When Dawson later took ship for Mazatlan, Mexico from San Pedro, he paid for his passage with a single otter skin.

At Santa Barbara we found an old otter hunter, A. B. Thompson, who proposed to go into partnership with us on the halves–he to furnish a vessel officered and manned, and to provision us; we to furnish boats guns and ammunition and do the hunting.

This partnership had the advantage that the hunters would not continually be needing to seek shelter to camp. With a vessel to back them up they could work quicker.

We first visited San Nicholas Island, and, hunting around it, killed several otter. Here we searched on shore for a lone woman whom we knew to be on the island, but failed to find her, although we found her tracks.

Anyone who has read Island of the Blue Dolphins, by Scott O’Dell, will recognize this reference. O’Dell used the story of the “Lone Woman” of San Nicholas as the basis for a novel for young readers. Island of the Blue Dolphins was published in 1960 and won the Newbery Medal in 1961. In the book O’Dell calls the girl Karana. I don’t think anyone knows her true Indian name. At the Santa Barbara Mission, where she was taken in 1853, she was known as Juana Maria. She lived alone on San Nicholas Island for 18 years and was not rescued (if that’s what it was) until 10 years after Dawson looked for her.

Dawson and his partners continued the hunt until the otter gave out, and then they went back to Santa Barbara and settled accounts.

I found myself with forty dollars in money and five or six otter skins, a broken arm, and my feet so badly bruised that I could scarcely walk on crutches. [This was the result of a fall off a cliff.]

About this time he decided he had seen enough of California, but “the difficulty now was how to get away.” Leaving California could be just as tricky as getting there, it seems, but eventually he was able to board a ship heading to Mazatlan, and take the overland route across Mexico. He wasn’t sure whether or not it was time to give up his wandering and head for the States, so he let his horse make the decision.

I saw the City of the Aztecs, and as I rode slowly out of it, my mind was still wavering. If I went on with my travels, I would strike out for Acapulco; if I gave them up, my route would be to Vera Cruz. I let my horse decide it. He took the road to Vera Cruz, and I have never regretted it.

But California would call to him again in ’49.

Nancy is a retired librarian who lives in Chico, California. She is the author of John Bidwell: The Adventurous Life of a California Pioneer.
View all posts by nancyleek →
This entry was posted in Nicholas "Cheyenne" Dawson, Uncategorized. Bookmark the permalink.