One Last Thought from Nicholas Dawson

On how to NOT get rich in California:

While I was slowly accumulating, the majority of fortune seekers in California were saving nothing. If they mined, they were shifting from place to place, or squandering money in impracticable ventures, such as turning rivers out of their channels; or else they lost as fast as they made by bucking at monte. 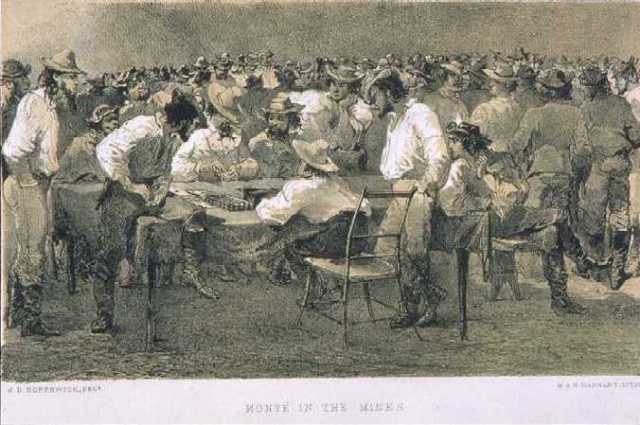 If freighting, they must have a mule team and feed it; put up at a boarding house while in Stockton; pay a dollar for a meal and twenty-five cents for a cigar or glass of whiskey at the tavern tents stuck up at every water hole along the road. Many, especially those from the North became homesick immediately upon arriving at the diggings, and if they had money enough to pay their way back, would auction off their paraphernalia and take the back track. Many who would gladly have got away had to stay; and even now some men stay in California because too poor to get away. Those who made the most were those who fleeced the miners.

Nicholas Dawson was proud of his ability to save money by “the most slavish labor and rigid economy.” He went home with $1600 in gold dust.

(All the information about Nicholas Dawson has been taken from Narrative of Nicholas “Cheyenne” Dawson (Overland to California in ’41 & ’49, and Texas in ’51), Number Seven of the Rare Americana Series Printed & Published by the Grabhorn Press of San Francisco in May, 1933.)

Nancy is a retired librarian who lives in Chico, California. She is the author of John Bidwell: The Adventurous Life of a California Pioneer.
View all posts by nancyleek →
This entry was posted in Nicholas "Cheyenne" Dawson, Uncategorized. Bookmark the permalink.