Lemericus Wyatt was quick to blame the Paiute Indians. The natives always made  convenient and believable scapegoats. A man named Fred Kingsbury, whose father had been Peter Lassen’s partner, later pointed out that:

When Indians kill they want something for it. They take anything and everything in sight. Nothing was disturbed, not even the food in camp, or Peter’s pocketbook, containing his money. It wasn’t an Indian job.

Left behind were two sacks of flour, plenty of dried meat, and a keg of whiskey. Why pass that up?

Young Chief Winnemucca denied involvement, and was quoted as complaining “that he was accused of killing Pete Lassen, who had been one of the best men he had ever known and with whom he had slept in the same blanket.” His cousin Sarah Winnemucca said that the Indian agent, Major Dodge, also did not think the Paiutes had killed Lassen. Dodge suspected Mormons.

The Mormons, it seems, were second only to Indians when it came to convenient scapegoats. There was no indication that Mormons had anything to do with it.

Captain Weatherlow suggested Pit River Indians. Weatherlow was in the other group that left two days before Lassen’s party to go prospecting in the Black Rock Hills. The settlers had had clashes with the Pit Rivers, and possibly they took revenge on Lassen. Again, there is no proof, and nothing was taken from the campsite. But Weatherlow didn’t want to think it could be a white man.

Three years later two two other men, James Bailey and William Cook, were attacked by Indians in the same region of Nevada. The camp was looted. Captain Weatherlow was in the group of ten men who set out in pursuit of the attackers. They found a camp of nine Indians (tribe not indicated) and killed them. By one of the corpses they found the gun Peter Lassen was carrying when he met his death. It was the only thing taken from Lassen’s campsite. 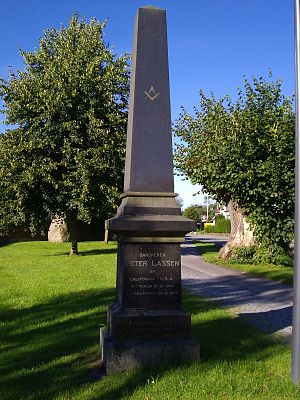 Memorial to Peter Lassen in his home town of Farum, Denmark.

How did the gun get there?

Ken Johnston, in his book Legendary Truths, has some suggestions:

Did the Indians kill Lassen and take his rifle? (But why didn’t they take anything else?)

Did the Indians take the rifle from Bailey and Cook? (If so, how did those two get it?)

Did Weatherlow plant the rifle on the dead Indian? (But how could he have arranged that?)

Or was Lassen not the target at all? Perhaps someone was after Clapper, and Lassen just happened to be in the way.

I can’t tell you the answer. The Death of Peter Lassen remains a mystery, never solved. If someone (not me!) wants to write a series of historical mysteries set in 19th century northern California, here’s one you can start with.

By the way, I used the name Lemericus Wyatt because that is a version that shows up in newspaper reports. But the only name that comes close in census records is Lemarcus Wiatt. I imagine that’s the same man. In the 1852 California census he was a 49-year-old Kentuckian living in Sonoma. In 1870 he is married, a carpenter, and living in Petaluma. But in between he must have gone to the Honey Lake Valley, met up with Peter Lassen, and then . . .  the mystery. 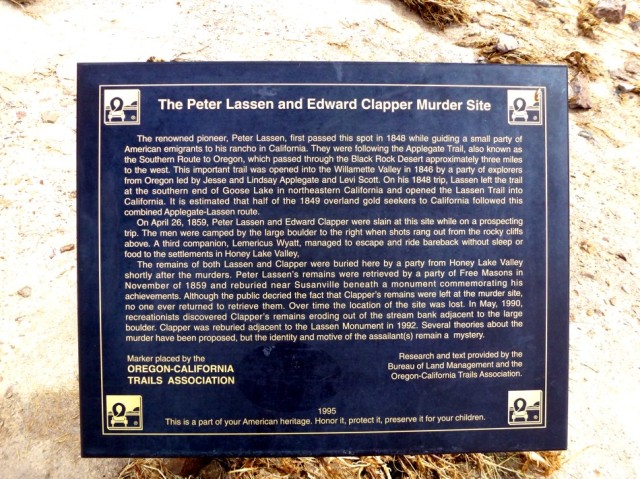 Trail marker installed at the site of the murders by the Oregon-California Trail Association.

Nancy is a retired librarian who lives in Chico, California. She is the author of John Bidwell: The Adventurous Life of a California Pioneer.
View all posts by nancyleek →
This entry was posted in Peter Lassen, Uncategorized. Bookmark the permalink.