A Visit to the Bayliss Library

The Bayliss Library, in Glenn County, celebrates its centennial this year, and yesterday the community marked one hundred years of library service to this rural area with everything you could want in a community celebration: speeches, music, food, activities for the kids, and the chance to see a lovely old-fashioned library. 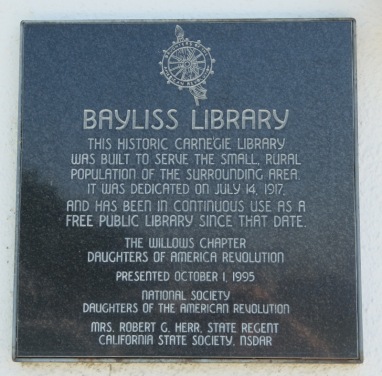 The Bayliss Library is a Carnegie library, built in 1917 with money donated by steel magnate and philanthropist Andrew Carnegie. Carnegie financed 1689 libraries in the United States, and many more overseas. 142 were built in California, and 36 of those still operate as public libraries, including the Bayliss Library. The Biggs Branch of the Butte County Library is also a Carnegie Library. Other Carnegie libraries in the region have been put to other uses: the library in Orland became a community center, the one in Oroville houses the Butte County Law Library, and the one in Chico is now the Chico Museum.

The Bayliss Library is unusual because it is a rural library, in an unincorporated community, surrounded by agricultural land. All other Carnegie libraries that I am aware of were established in incorporated towns and cities, where the municipal government was responsible for the continuing staffing and maintenance of the library. Bayliss Library is now operated as a branch of the Willows Library, and is open one day a week, on Tuesdays.

Andrew Carnegie watches over the library, which has fine wood trim and bookcases throughout.