This is John Bidwell’s last letter to George McKinstry for the year 1848. He is still at the ranch of Charles Roether, which was on the Feather River at Honcut Creek, where he has been buying cattle to drive to the mountains. He has also been checking over the stores sent up the river from Sacramento — he can’t find the pepper, the raisins, or the drawers (underwear) and shirts.

Yours of yesterday was rec’d. I am at a loss to know where the drawers & shirts could have gone, which you say are missing. I have not time this morning to overhaul all of the boxes & bales to see whether or not they are here. I have opened all the boxes & have seen nothing of the pepper, nor the half box of raisins. I rec’d from McDougal the number of packages & boxes mention by you on the memorandum.

Before I received your note yesterday by Rolfe I had concluded the arrangement for beef and I send Rolfe, that we may not discharge the Indians, or at least to have them return on Tuesday, Rolfe will have to be here on Sunday evening; Monday night we sleep on the plains & Tuesday I come with cattle. I went up on Yuba and saw Covillo. I shall bring 40 or 50 head at [?] dollars per head you will not of course disclose this to any one till I see you. (If inquiries from the other side, say (M.T.)

The cattle for beef is important because that was one way they paid their Indian workers. No beef and the Indians would leave Bidwell Bar and go home. So the sooner they can get the beef to the mountains the better.

I will have to look at the letter again (I have only a typescript with me at the moment) to see if I can figure out how much he paid for the catte. He was hoping for something under $40 a head. He must have got a good price or he would not have cautioned McKinstry to not disclose the price. I assume that “say (M.T.)” means say nothing.

Bringing this number will not in any manner interfere with other plans. I hope you will have everything as ready as possible, grind the knives on the grind stone of Old John, etc. etc. etc.

I think Hensian [?] had better put another hide in the water to mend any places where the coyotes may eat the hide of the corral, and fasten on to all of those sticks where the Indians lashed the stocks with hide, I do not want to “fail” in this job.

It’s going to be butchering time when Bidwell gets there with the cattle, hence the notes about sharpening the knives, and mending the corral with hides.

P.S. I forgot to say in my letter the other day that Reading had passed two days ago down to Fort and getting along very well, Peter Lassen has got in with all his party & wagons, also the Columbia party & wagons, some on Feather River already – this news from Swift.

Here we have some names well-known to students of northern Califoria history. Pierson 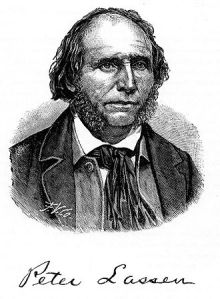 B. Reading, a good friend of Bidwell’s, owned Rancho Buena Ventura at the present site of Redding. He mined extensively in Shasta County.  Peter Lassen had a ranch in Tehama County where Vina is today. In his effort to promote his ranch, he had returned to Missouri in 1847 where he recruited a party of settlers and brought them to his ranch by way of the Lassen Trail. He only learned of the gold discovery of January 1848 when he found his ranch virtually deserted.

Granville Swift was another California pioneer who was a Bear Flagger and a prosperous cattle rancher in Colusi County (later split up into Clusa, Glenn and Tehama counties) before he made a fortune at gold mining. The remains of his adobe home can be seen in Orland.

All three of these men deserve blog posts of their own, and someday they will get them.