A Visit to the Kelly-Griggs House

The Kelly-Griggs House is a classic example of 19th century American architecture, and one of several handsome Victorian homes in Red Bluff, California. If you visit it, you must give yourself a some extra time to drive around the neighborhood and enjoy the other fine houses of Red Bluff. At the Kelly-Griggs House Museum they can give you a handy “windshield tour” map of other Victorian homes.

The house was built in the 1880s by Sidney Allen Griggs, a prosperous dealer in sheep and cattle. Griggs, a native of New Hampshire, caught “gold fever” in 1849 and took the Panama route to California. After so-so luck in the gold fields, he moved to Tehama County and started a sheep ranch on Mill Creek. In 1880 he built his commodious residence on the corner of Washington and Ash Streets.

In 1885 Sidney Griggs married Melvina Roundtree Montgomery, the wealthy widow of John M. Montgomery, the owner of the Capay Grant. She was said to be very beautiful, and she and Mr. Griggs were active in civic and social affairs. Mr. Griggs died in 1906 and his wife continued to live in the home until her death in 1931 at the age of 91.

The house was purchased by the Kelly family in 1931. The Kelly parents were of Irish descent from Australia, coming to California in 1870. They were ranchers and farmers, and the owners of the “Kelly’s Place” resort in the Warner Valley, now a part of Lassen National Park. Several of the unmarried sons and daughters of the family bought the house in Red Bluff after the deaths of their parents.

The last resident of the house, Miss Anne Kelly, sold her home to the Kelly-Griggs House Museum Association in 1966.

The museum contains an extensive collection of Victorian costumes and textiles, everything from quilts to wedding dresses to delicate under garments. There is also an important collection of Native American artifacts, including baskets and stone tools. The man known as Ishi, the last Yahi, is featured in the collection. He was born in Tehama County not far from Red Bluff.

Our docents gave us a delightfully informative tour of the house. Photography is allowed, but they asked that photos not be posted online, so I have only included photos of the outside of the house. To see the interior, do visit or book a tour.

The Kelly-Griggs House Museum is currently closed for exterior renovation, and when the restoration is complete and all the furnishing put back in place, it will be better than ever. Watch for the re-opening. The regular hours are Sundays & Thursdays from 1 to 3 PM.

And don’t forget to look for those other Victorian houses in Red Bluff. Here are pictures of just two of the many fine homes. 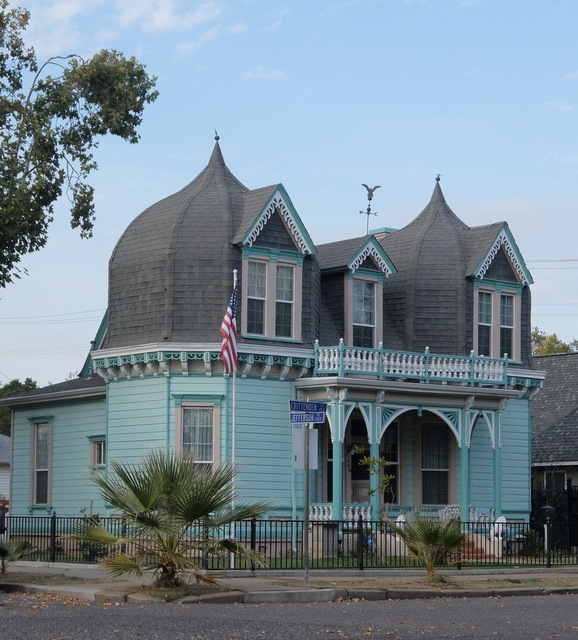