The Gold Queen and the Gold King

Jim Silverman, whose fascination with California history led him to create a blog called This Week in California History, posted these two pictures on Facebook. I can’t resist sharing them. 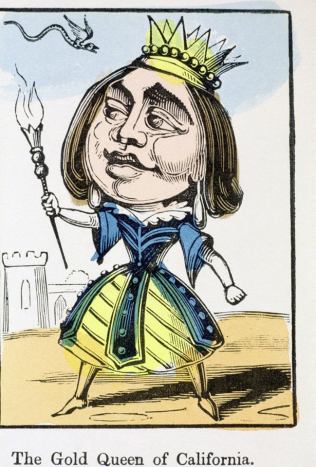 These two illustrations are from a children’s book published in London in 1850, which just goes to show how quickly the news of gold in California spread around the globe.

Jim has this to say about the pictures:

This book was in the personal library of Mary Schofield, a foreign languages cataloger at the Stanford University Library and serious collector of children’s books. She travelled to Europe periodically and hunted for European children’s books about California and owned some remarkable, if not unique, items Her collection is now part of the Green Library at Stanford and I’ve combed the list of books there from her collection but haven’t been able to identify this one. I’ll send them the images with a query and see what happens. If they find it, I’ll drive down to read it.

Children’s books about California! That sounds right up my alley. I’d love to see the Mary L. Schofield Collection.   She collected over 10,000 works of European children’s literature.

The Gold King and Gold Queen don’t look like they have much to do with California; they look more like playing card figures or characters in a Gilbert & Sullivan opera. It would be interesting to know what the book was, and whether there is anything else in it that demonstrates the world’s fascination with California. 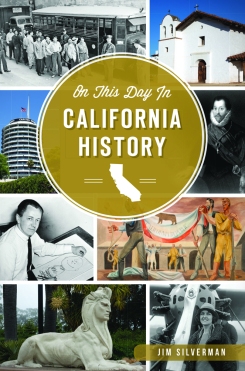 If Jim posts anything more about the book and the illustrations, I’ll let you know. In the meantime, take a look at his blog, and maybe go out and get his book. I hear they have it at Costco.