A Visit to Bidwell Mansion

My OLLI group has been visiting Historic Homes in Northern California, and today we visited Bidwell Mansion State Historic Park. OUr tour guide was Noel Lopez. Most of the group had visited it before, but some not for twenty or thirty years. And that’s just too long! I know most of my readers are familiar with the Bidwells and their beautiful home, but I’ll go ahead and give you a little tour anyway. 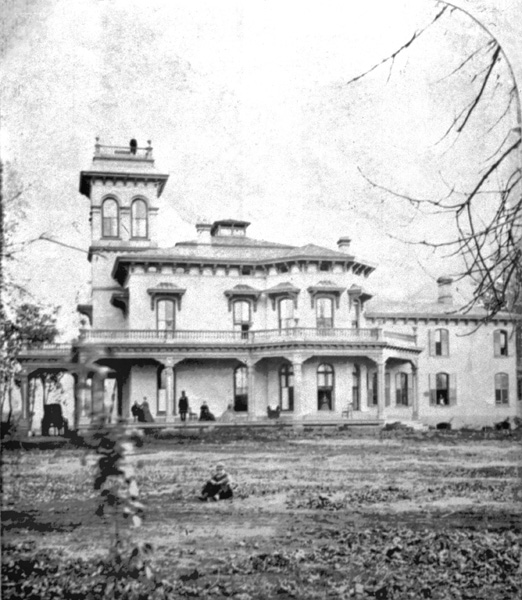 Bidwell Mansion State Historic Park is a three-story, 26-room Victorian House and Museum that stands as a memorial to John and Annie Bidwell. John Bidwell came to California as a leader of the emigrant group that blazed the California Trail in 1841. He was known throughout California and across the nation as a pioneer, farmer, soldier, statesman, politician and philanthropist.  Annie Ellicott Kennedy Bidwell, the daughter of a socially prominent, high ranking Washington official, was deeply religious, and active in the suffrage and prohibition movements.

John Bidwell began the building of his mansion in 1865, just as he was leaving to serve in the U.S. House of Representatives. In the previous fifteen years he had lived in a log cabin (which burned down in 1852), a two-story adobe building (which also served as a hotel and tavern), and a brick Federal-style house. There are, unfortunately, no photographs of the latter building.

Bidwell had political ambitions and hopes for a career in state politics. He had sought the nomination for California governor before, and he would do it again. He needed a house that was fit for a governor, one in which he could entertain in style.

In Washington John Bidwell met and courted Annie Kennedy, After his term in office was finished, he returned to California and continue to correspond with Annie until he persuaded her to marry him. The Bidwell’s were married April 16, 1868 in Washington, D.C. with President Andrew Johnson and General U. S. Grant among the guests. Upon arrival in Chico, the Bidwells used the Mansion extensively for entertainment of friends and visitors to Chico.

When completed in 1868, Bidwell Mansion featured the most modern plumbing, gas lighting and water systems. Each of the bedrooms ha

s a sink with running water, and the three bathrooms on the second floor (one in the servants’ rooms) have bathtubs and flushing toilets, an innovation in the 1860s. From the tower John Bidwell could survey his pastures, fields, and orchards. He could even see the Sacramento River, seven miles away, and Chico Landing, where the steamboats docked.

Designed by San Francisco architect H. W. Cleaveland , the overall style of the three-story brick structure is that of an Italian villa, with high ceilings and large windows. The outside and inside walls are two thicknesses of brick with an air space in between for insulation. The building’s exterior is finished with a pink-tinted plaster.

Upon her death in 1918, Annie Bidwell bequeathed the mansion to the Presbyterian Church. They intended to use it as a seminary, but it was too expensive to maintain. The church donated it to Chico Normal School, now California State University Chico. It served as a dormitory for women students and later housed the Art and Home Economics departments. In 1964 the California State Park System acquired the mansion and it became Bidwell Mansion State Historic Park. The Bidwell Mansion Association was founded to aid in the restoration of the mansion. Bidwell Mansion is a California Historical Landmark and is listed on the National Register of Historic Places.