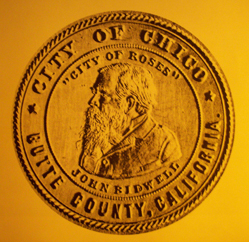 Not long ago a friend of mine asked me why John Bidwell did not name the town he founded after himself. He could name it anything he wanted. Why Chico? Why not Bidwellville, or Bidwellton, or Bidwell City?

It used to be pretty common to name a town after its founder, or someone the founder wanted to honor. Gridley is named for founder George W. Gridley. Redding is named for railroad man Benjamin Redding (or maybe pioneer Pierson B. Reading, who owned the rancho Redding was built on). Weed is named for founder Abner Weed, and not for  tumbleweeds or any other plant. Susanville is named after Susan Roop, the daughter of founder Isaac Roop (before that it was Rooptown) and Marysville is named after Mary Murphy Covillaud, a survivor of the Donner Party and wife of Charles Covillaud, who bought Theodor Cordua’s ranch. Cordua called the community he founded New Mecklenburg. 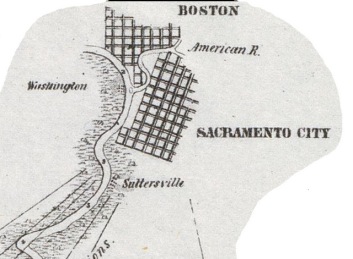 John Bidwell had been employed by John Sutter to survey the prospective town of Sutterville, just south of Sacramento. Even though it was laid out on higher ground than Sacramento (which was prone to flooding), it never took off, and Bidwell’s lots in the town were worthless. Maybe that was not a good omen.

Bidwell was never much for naming things after himself. As a state senator, he had a hand in naming the counties. He named Sutter County after John Sutter, whose Hock Farm was located there. Perhaps he could have named Butte County after himself, but he didn’t.

In 1849 Bidwell bought Rancho del Arroyo Chico. I don’t know who named it that, but Chico Creek (Arroyo Chico — Small Creek) seems to have had that name when he got here. He sometimes referred to his place as Rio Chico, or Chico Farm. It must have seemed natural then to name the town Chico.

What we called Bidwell Park was named by the city. He and Annie never called it that — they called the area Vallombrosa. There is Bidwell Junior High School in Chico, and two Bidwell Elementary Schools, one in Red Bluff and one in Sacramento. But no town of Bidwell. 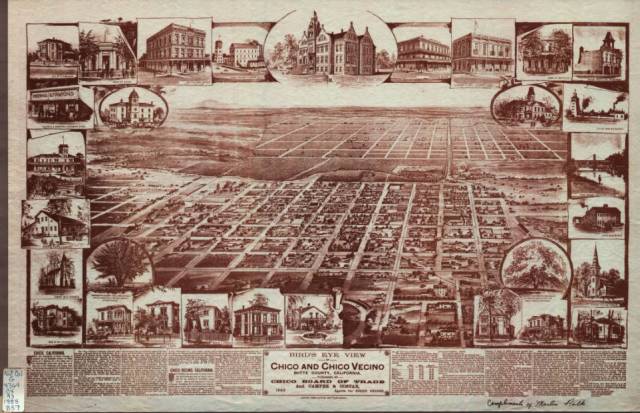 There is a Bidwell Avenue in Chico, which runs along Big Chico Creek west of Nord Ave. Two other streets that were named after John Bidwell have disappeared. I wrote about one of them here. John Gallardo recently informed me that another Bidwell Street shows up on an 1888 bird’s-eye map of Chico. I think it was what is now 12th Street. It is right at the bottom of this map. You can get a closer look at the map at the Chico State Historical Map Collection.