The central building in 1879, surrounded by an empty field

“In its broken, withered and dilapidated condition it offers sublime evidence of the devastation of time.”

So wrote the Sacramento Daily Union on September 2, 1891. But by 1890, nostalgia for “the days of old, the days of gold, the days of ’49” had roused the citizens of Sacramento to restore Sutter’s Fort to its former glory. The newspaper reported  that restoration work had begun and was being “carried on in good earnest.”

The foundation was strengthened with brick and cement, and new adobe bricks were made in the time-honored fashion.

A force of men are busily engaged in making adobe bricks on the ground. This work, to the uninitiated, is peculiarly interesting, for, in order to duplicate the original strength, it necessitates using the same kind of earth, and the same line of operation that was adopted by the original builders. The earth is mixed with water and tramped into proper consistency by the bare feet of the workmen. It is then molded into proper shape and placed on the ground to dry. After being turned several times it soon becomes hard enough for use.

The original fort must have been even larger than it appears today, because the newspaper reported that

Owing to the fact that the south corner of the outer walls extended to where the center of L street now is, the Restoration Trustees have decided to abandon the work of restoring that portion. It is, however, the intention to restore the two bastions, one at the west and the other at the east angles of the building, and show the profile of the outer trails jutting from the bastions, and gradually breaking down to the ground. Limited space in the two blocks will not permit the restoration of the entire outer walls, but by the foregoing plan the exact outline of same can be shown.

As it is, L Street has to curve slightly around the grounds of Sutter’s Fort State Historic Park. 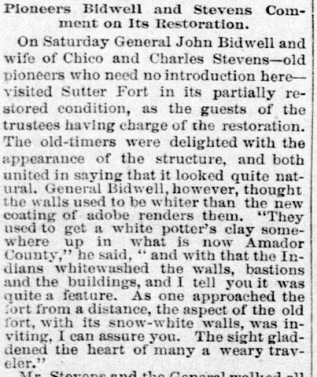 In January 1892, the Trustees invited John Bidwell and another old-timer, Charles Stevens, to inspect the work.

The old-timers were delighted with the appearance of the structure, and both united in saying that it looked quite natural. General Bidwell, however, thought the walls used to be whiter than the new coating of adobe renders them. “They used to get a white potter’s clay somewhere up in what is now Amador County,” he said, ” and with that the Indians whitewashed the walls, bastions and the buildings, and I tell you it was quite a feature. As one approached the fort from a distance, the aspect of the old fort, with its snow-white walls, was inviting, I can assure you. The sight gladdened the heart of many a weary traveler.

It must have gleamed as white in the old days as it does today.

Sutter’s Fort in 1847. Library of Congress

Nancy is a retired librarian who lives in Chico, California. She is the author of John Bidwell: The Adventurous Life of a California Pioneer.
View all posts by nancyleek →
This entry was posted in Sutter's Fort. Bookmark the permalink.