Settling a Lawsuit with a Horse Race

John Bidwell was not a gambling man. In Gold Rush California, where men would bet on just about anything, and where horse-racing was popular entertainment, Bidwell generally stayed away. But one time he found himself the participant in a horse race that would decide the outcome of a lawsuit.

In the Fall of 1852, a former Rancho Chico employee by the name of James Dinning sued Bidwell for back wages in the amount of twelve dollars. Bidwell refused to pay him, although his reason is unclear, and who really had the legitimate claim in unknown at this date.

Attorney George Adams Smith took Dinning’s case before Chico’s Justice of the Peace, Thomas Wright Shelton, who held court in his house, which also served as a public gathering place. Bidwell was represented by Charles Lott. Squire Wright (as he was known) assembled a jury of twelve men, but as the lawyers consulted, someone in the crowd suggested that the matter be settled with a horse race.

The notion caught the fancy of Squire Wright, who was fond of a horse race himself. He announced:

“Gentlemen, the parties propose to settle the case with a hoss race. I think that his is the best way to settle it myself. Therefore, the court will adjourn until the hoss race is over.” 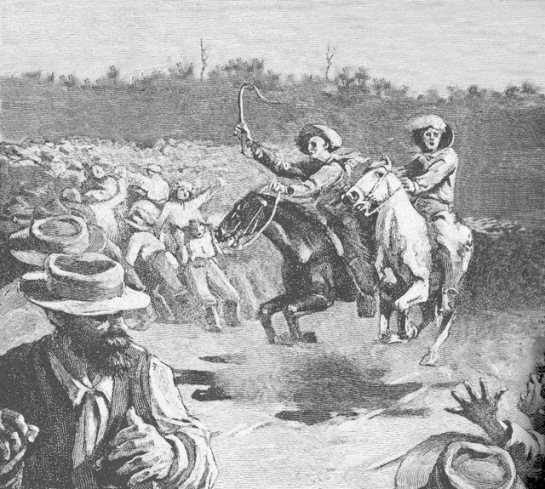 Attorney Smith loaned his client his own swift horse “Rabbit Catcher.” Bidwell gave his black saddle horse to his employee Frank Davis to ride for him in the race. It was stipulated that in case Bidwell lost he would pay the $12 but would not pay costs.

The race was on – Bidwell’s black saddle horse against “Rabbit Catcher.” You can imagine the excitement! Suddenly, something startled Bidwell’s horse and he dashed off the track and into the chaparral.  No sooner had the race begun than it was over.

Judge Wright ruled that John Bidwell had lost the case by default of his horse and had to pay Dinning his $12. But Dinning was responsible for the court costs, which amounted to $18.

Bidwell was disgusted with the whole proceedings and never again engaged in a horse race.

Squire Wright’s house still stands, the oldest wood frame building in the Sacramento Valley. Chico Heritage Association has devoted time, money, and a great deal of effort to preserving the house, which you can read about on their webpage.

The story of this horse race has been told many times. George C. Mansfield, in his History of Butte County, tells it, but he gets a few of the facts wrong. Rockwell Hunt heard the story “straight from the horse’s mouth,” so to speak, and relates it in John Bidwell: Prince of Pioneers. But Bidwell didn’t explain to him why he had the disagreement with Dinning in the first place. The best account comes from Michele Shover, in her essay The Doctor, the Lawyer, and the Political Chief, where she relies not only on the Bidwell/Hunt version, but also contemporary letters between Smith and Bidwell.