A Tour of Rancho Chico, Part 2

Dow devoted not one, but two chapters of A Tour in America to General Bidwell’s Rancho Chico. His next chapter is about “A Fruit Orchard of 1000 Acres.”

The 1000 acres of orchard and vineyard are not all in one block, but grouped around a number of the homesteads in different parts of the property. One homestead has its apple and pear orchard, another its almond orchard, and so on, a system which enables the main work of fruit-gathering to Be conducted at the various centres in turn.

He says that irrigation is available but generally not used in the orchards, which surprised me. Maybe my fruit trees could get along with less water than I give them. I worry that they will dry up and blow away over the long hot valley summer. Back in the day, irrigation was mainly used for the nursery and the vegetable garden.

The only large towns in the state available as markets are San Francisco (with less than 300,000 inhabitants) and Sacramento (with 26,000) while, as these cities have extensive areas of fruit gardens in their immediate vicinity, much of the supply from Chico must be sent to the more distant centres of population. A quantity of green fruit is sent by rail to cities in the eastern states, reaching as far as Chicago, New York, and New Orleans, thousands of miles from Chico, while the canning establishment puts the surplus in a condition to be transported to any part of the world.

It’s no wonder General Bidwell wanted to build the Humboldt Road to the mines of Nevada and Idaho. He needed markets for his surplus produce.

Dow also tells us the cost of labor: “The cheapest labour in the country costs 4s. 2d. per day, this amount being paid to Chinese, and to women and girls in canning factories, while white men receive from 6s. to 8s. 6d. a day.”

And how much was an Australian shilling worth in 1883? According to my trusty web pal, Measuring Worth, one shilling was worth $5.60 Australian dollars today, which is $4.40 American. So a white male laborer was making about $4 a day on Rancho Chico.

But wait! There’s more. Measuring Worth always has a caveat, as follows:

And much more, which I would need a degree in Economics to understand. 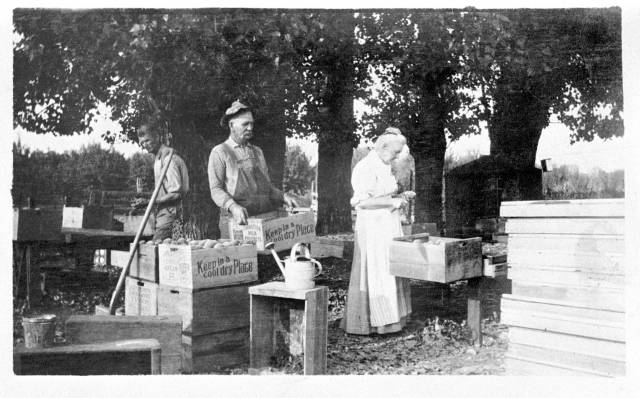 Peach packing in the orchard. Note the age of the workers. If it weren’t for Social Security, that would be me.

The fresh fruit which is sent to market is gathered and placed in small boxes in the orchard, the fruit being graded or assorted to some extent upon the spot. A light waggon gathers up the boxes and takes them to the fruit-house, where they are evenly filled and closed up ready for transportation to the railway station, about half a mile distant. Fruit intended for such distant markets is packed in a special way. Each pear or plum is wrapped in a piece of paper before being placed in the box ; a Chinaman, at a dollar a day, being very expert at this kind of work.

So it could be that 4 shillings a day was more like $1 US, which is in line with average wages in the U.S. in 1880, according to another website.

Much of the fruit was dried, and a lot of the apple crop was turned into vinegar. Dow explains the process. Anyone wishing to set up a similar operation today could get quite a bit of information from reading Dow’s Tour in America. Dow has this to say about grapes, wine, and raisins:

General Bidwell formerly made wine, but now raisin-making varieties of grapes are being substituted, and no wine is produced. It is believed by many that raisin-growing is more profitable than wine-making, but this consideration has not been the General’s object in changing his procedure. He came to the conclusion that the making of wine contributed to intemperance, and therefore devoted his vineyard to the production of raisins.

Prunes drying. Fruit was partially dried in the sun, and finished in an artificial drier.

3 Responses to A Tour of Rancho Chico, Part 2