The Pacific Rural Press’s issue for July 3, 1886, continues with a description of “the famous Rancho Chico.” John Bidwell was known throughout the state for introducing new plant varieties and for innovative agricultural methods. The reader will notice the antiquated and condescending way in which the Indians on Rancho Chico are described.

Adjoining Chico on the northwest side is General John Bidwell’s princely estate, the famous Rancho Chico, which embraces over 20,000 acres of the most fertile land, and is noted for the great variety of its productions. Here are to be seen miles and miles of beautiful avenues, lined with stately trees laden with the choicest fruits of many different climes; northern and tropical trees and plants nourishing side by side.

One famous fig tree on the ranch never fails to attract the attention of visitors. It was planted in 1856 and has attained a marvelous growth. One foot above the ground the trunk measures 11 feet in circumference; the wide-spreading branches have been trained toward the ground, and taking root there, banyan-like, they now form a wonderful enclosure over 150 feet in diameter. The tree is loaded every year, and has produced tons and tons of figs.

E. Nelson Blake told his biographer in 1920 that he and John Bidwell had planted this fig tree from a cutting obtained at Mission San Jose in 1851 (not 1856). “One of these trees still stands in front of the late General’s home and is used by Sunday-school parties from Chico as a picnic ground. Some of the branches have reached to the ground and have taken root like a banyan tree.”

A short distance in the rear of the General’s residence is a pretty little deer park, which adds much to the beauty of the grounds. Chico creek flows through the ranch, and irrigating ditches run in all directions. On the estate is a flour mill, a fruit cannery, a dairy, and numerous hothouse, fruit-driers, packinghouses, etc. 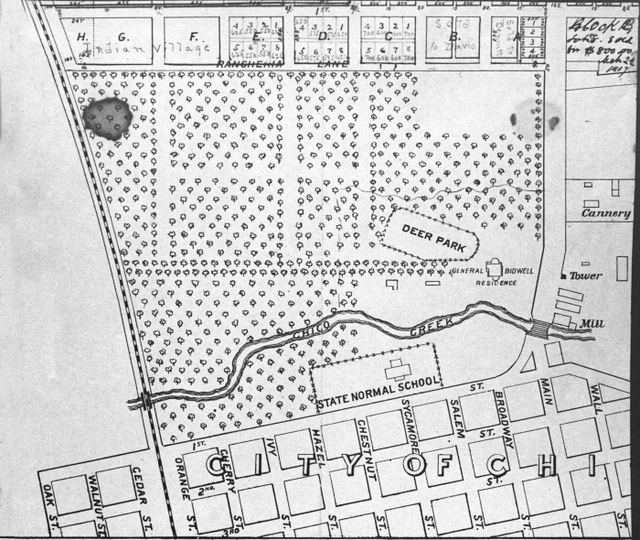 This map from about 1890 shows where the deer pen, the cannery, the flour mill, and the college were.

A curious feature of the place is the large Indian rancheria situated on the back part of the ranch. The dusky inhabitants of this village live very contented lives here in their primitive fashion, and fare much better than their brethren in many other parts of the State. They are wedded to many of their old customs and traditions and have an immense sweat-house, in which, at certain times, they hold their usual orgies and go through the famous melting process. A brass band, composed of about a dozen of the younger bucks, is much in demand at picnics and outdoor celebrations. Many of the Indians find profitable employment on the ranch and prove valuable help during the fruit gathering season. 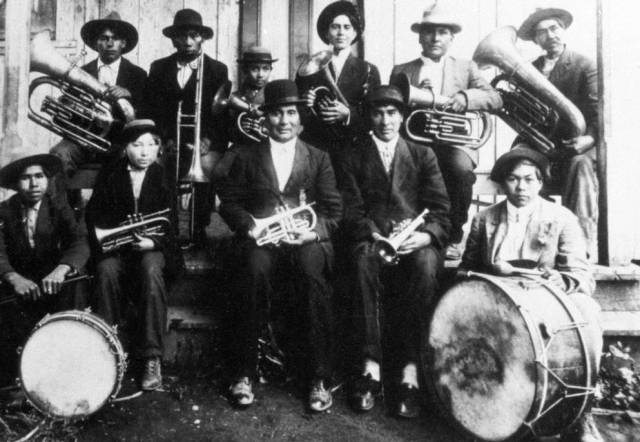 The prosperity of Chico would be further advanced by the subdivision into small farms of several large tracts of land in this vicinity now held by a few persons. The Reavis ranch, the Pratt grant and the Parrott grant include immense tracts of land of more than ordinary fertility, which at present is almost exclusively devoted to wheat-raising on a large scale but should be divided into 20 and 40-acre plots and set out in fruit trees and vines. It is estimated that in this county there are 102 landowners whose holdings vary from 1000 acres to 116,000 acres each. That these large tracts will in the near future be subdivided and sold off in small-sized farms seems very probable, as the land must soon become too valuable for farming by the present methods.

The Pacific Rural Press was in favor of smaller farms so that more farmers could obtain land. Gradually this came to pass, as landowners like Bidwell sold off pieces of their property, although some very large spreads remained.

Nancy is a retired librarian who lives in Chico, California. She is the author of John Bidwell: The Adventurous Life of a California Pioneer.
View all posts by nancyleek →
This entry was posted in Chico, Uncategorized. Bookmark the permalink.