On the Trail of Peter Lassen — 2

No visit to Susanville on the trail of Peter Lassen is complete without a visit to Lassen’s grave. He is buried in a small Masonic cemetery about 5 miles south of Susanville. The cemetery has a charming little turnstile gate next to a stone marking the site.  It’s a beautiful setting for a resting place, on the edge of the valley where sheep graze and the graves are shaded by tall Ponderosa pines.

When Lassen was murdered on April 26, 1859 in the Black Rock Desert, his friends went to investigate. They buried the bodies of Lassen and his partner Ed Clapper at the murder site. But this was deemed unbefitting so notable a pioneer, and in November 1859 his remains were brought back to the Honey Lake Valley.

Lassen was buried next to the mammoth Ponderosa pine that had been his shelter when he first came to the Honey Lake Valley. Over the years the tree died and was removed in 1961. Scientists studying the tree declared it to be some 600 years old, and probably the oldest and largest tree of its species in North America. The stump, nine feet in diameter, still sits next to the grave. 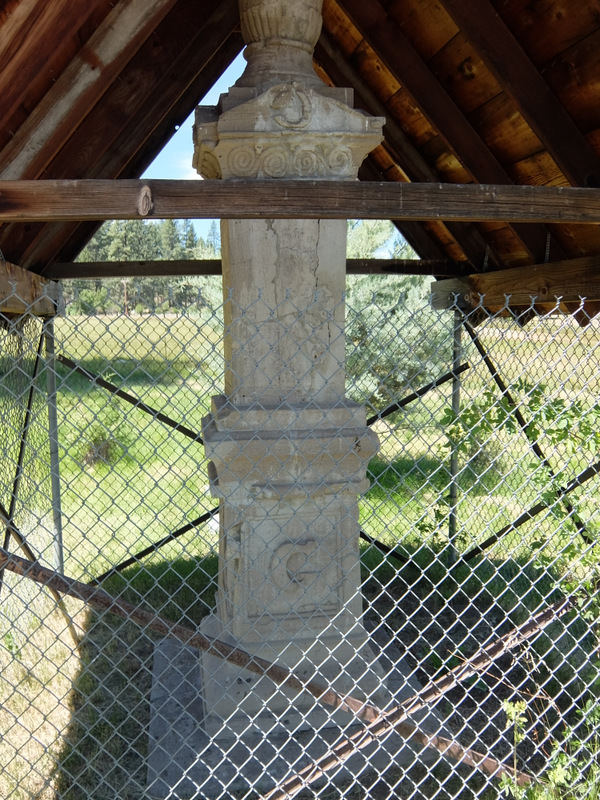 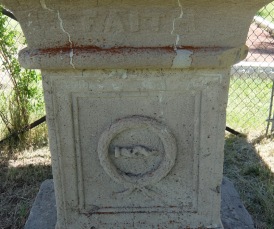 The grave marker is a handsome example of 19th century mortuary art, carved with Masonic symbols, such as an all-seeing eye and clasped hands, as well as crossed gun and arrow. The monument is fenced in and roofed to preserve it from weather and the the kind of vandals who like to carve their initials on anything handy.

The soft rock of the grave marker has weathered over the years, and a granite monument was erected in 1917. The inscription reads: In memory of PETER LASSEN the pioneer who was killed by Indians April 26, 1859 / Aged 66 years. The age is wrong — he was 58 when he was killed, and the attribution of his death to Indians is most likely incorrect as well.