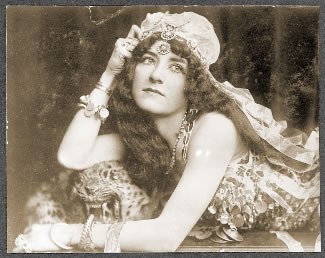 Nan Aspinwall, the “Montana Girl,” was not raised on a ranch in Montana. She was born in New York state in 1880 and as a small child moved with her parents to Liberty, Nebraska, where her father was a storekeeper. How she got into show business is not known, but her first experience on stage was not as a cowgirl performer, but as an oriental dancer. She was billed as Princess Omene, bedecked in glittering jewelry and gauzy veils.

Although oriental dancing had a risqué reputation as “hootchy-kootchy” dance, publicity assured the public that Princess Omene’s act was tasteful and refined, suitable for family entertainment. It was sometime after she met her husband that Nan took up the persona of a cowgirl, although she continued to also perform as Princess Omene from time to time.

Frank Gable grew up in Montana and, like Will Rogers, had an act as a lariat twirler and trick roper. Sometime in the first years of the 20th century he met and married Nan Aspinwall and introduced her to the skills that would become her new act. By 1908 Frank and Nan were performed in Buffalo Bill’s Wild West and Pawnee Bill’s Far East show, where Nan could do both her acts as the Montana Girl and Princess Omene.

Frank and Nan can’t have stayed with Buffalo Bill for very long, because by 1910 they had struck out on their own on the circuit, and were looking for a way to publicize their act. That’s when they came up with the idea of a solo trip by Nan across the United States. She was not the first woman to attempt such a journey, but she would be the first to complete it. 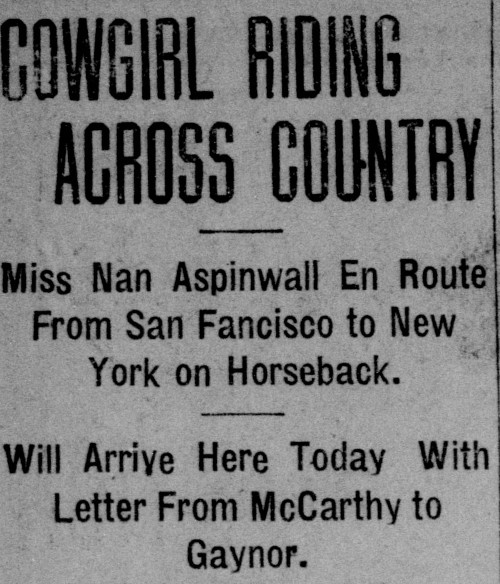 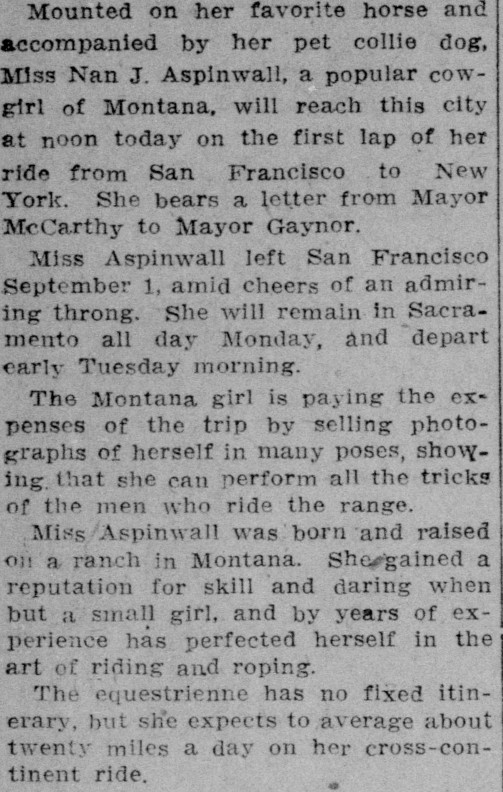 She certainly had the moxie to carry out her ambition. The Los Angeles Herald reported:

Miss Aspinwall is an experienced horsewoman, not only on the range but also with “Wild West” shows. She says she has no fear of accident to herself on the ride, but desires to secure a horse that will be able to stand the trip without mishap. “If I do not get the right kind of a horse soon,” said Miss Aspinwall yesterday at the Lankershim, “I will send to my father’s ranch In Montana and have one sent me from there. Of course, on a trip like this, I must have the best animal procurable—one that will make the trip and still look well when I arrive In New York city. Along the route, If people are interested In my stunt, I will give riding exhibitions. I would have issued riding challenges to women along the way if it were not for the fact that I am just recovering from a broken leg, which prohibits any such thing. However, I am always willing to meet any of my sex in a roping contest, and will issue challenges to that effect while en route.” Miss Aspinwall is only 24 years old [she was actually 30 and married], but has lived in the saddle practically all her life.

Nancy is a retired librarian who lives in Chico, California. She is the author of John Bidwell: The Adventurous Life of a California Pioneer.
View all posts by nancyleek →
This entry was posted in Nan Aspinwall, Uncategorized. Bookmark the permalink.