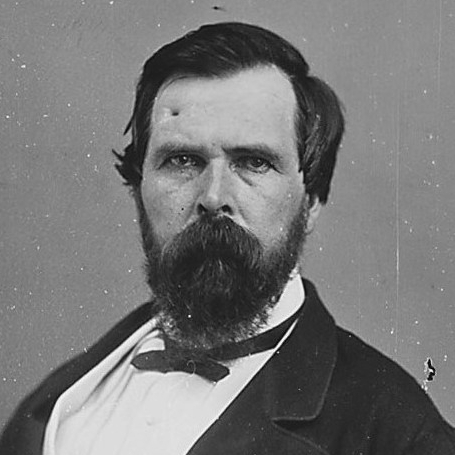 Have you ever seen a photograph of John Bidwell that so clearly showed him with a hole in his head?

This photograph, taken at the Mathew Brady studio in Washington, D.C. in 1865, shows the injury he suffered in a steamboat accident in 1856. It’s a photo that we do not often see.

Annie, I have heard, did not care for pictures that showed her husband’s scar. In the following two photos, one from 1867 and one from 1885, the scar is visible but very faint, and I suspect the photographs have been touched up. 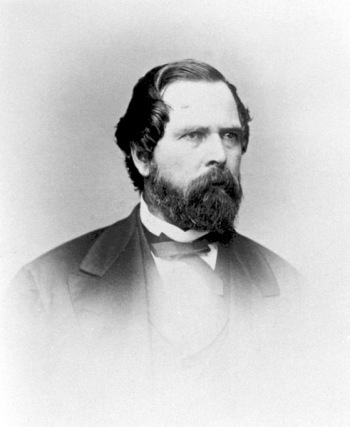 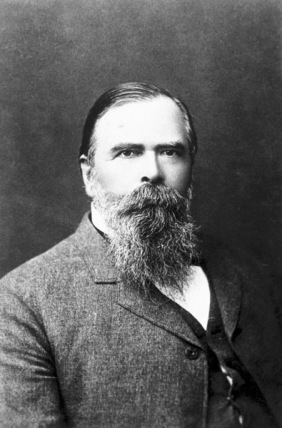 Bidwell sustained his injury when the boiler of the steamboat Belle exploded on the Sacramento River, as he was traveling upriver from Sacramento City to Chico Landing. The accident occured on the morning of February 5, about ten miles from the city.

Bidwell told the story of the accident to his biographer, Rockwell D. Hunt. In John Bidwell, Prince of California Pioneers, Hunt writes that Bidwell was sitting by the stove, reading the morning newspaper when:

At that instant an explosion in the engine took place. He immediately grasped the side of the berth with both hands, holding his breath to avoid the hot steam. He was virtually paralyzed, and was unable to break the cabin window for a moment; but his strength soon returned, and he stuck his head out of the window. The wound inflicted on his head by flying iron — he never knew just what hit him — was a severe fracture of the external skull about the size of a twenty-five cent piece; but his recovery was complete.Of the few passengers on the boat he said nearly all were killed, also the captain and the clerk, and the pilot was seriously injured.

The story of the explosion and loss of the Belle was widely reported in the newspapers. Here is the beginning of an article from the Sacramento Daily Union. 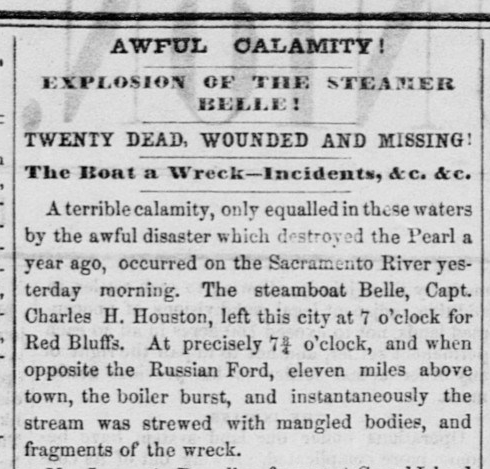 The article goes on to say that there were about forty passengers on the boat and at least twenty of those were dead, wounded, or missing. Survivors were picked up by a steamboat coming downriver. The fate of pets on board did not go unreported.

A canary bird belonging to Mr. Mix was in a cage placed on a table in the cabin, at the time of the explosion. Although the table was almost entirely demolished by being cleared by portions of the boiler, the bird and cage escaped uninjured, with the exception of the latter being slightly bent. The bird is now singing as sweetly as ever at the Orleans, the accident having merely disturbed its plumage.

Nancy is a retired librarian who lives in Chico, California. She is the author of John Bidwell: The Adventurous Life of a California Pioneer.
View all posts by nancyleek →
This entry was posted in Steamboat Belle, Uncategorized. Bookmark the permalink.