While Sarah Althea Hill’s suit for adultery was still pending, ex-Senator Sharon filed his own civil suit in federal court against her for falsely alleging that they were married. He could sue in federal court because he claimed residency in Nevada, the state where he had made his pile of money and had been elected to the U.S. Senate, while Allie was a resident of California. Although this suit would disappear from public notice as the cases for adultery and divorce held the attention of the press and public, in the end it would have fatal consequences for Allie’s fortunes.

But before all this acrimony, Allie had been either William Sharon’s wife or his mistress for over a year. He had his rooms in the Palace Hotel, and she had hers in the Grand. The two hotels were owned by Sharon and connected by an enclosed bridge over Montgomery Street. 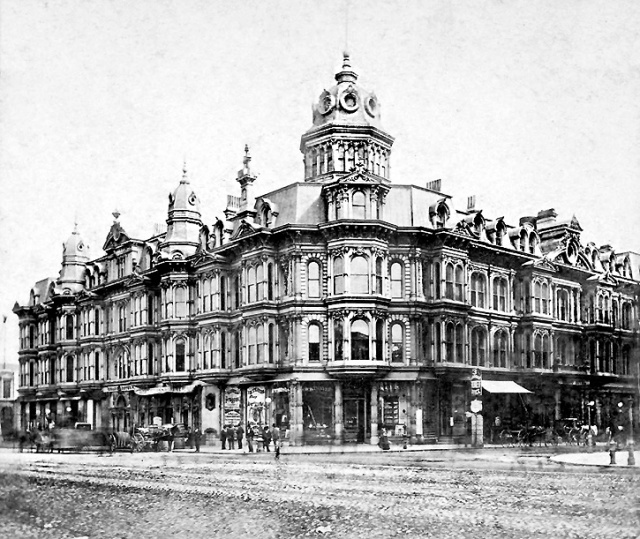 The Palace Hotel, with the bridge to the Grand on the left

Allie testified that she often crossed over the bridge to spend the night with Sharon. They went out together on carriage rides, to champagne dinners, and she even visited Ralston Hall in Belmont, the mansion he had acquired after the death of his partner, William C. Ralston. Although not publicly acknowledged as his wife, she certainly filled that role for a time.

Discord arose between the two in the fall of 1881. Sharon attempted to pay Allie off and ordered her out of her rooms in the Grand Hotel. She refused to go; he had the carpet outside her rooms taken up. Next to go was her front door. When he ordered men to start ripping up the carpet inside her rooms she finally moved out.

Some weeks later, according to Allie, they reconciled for a time. In order to bolster her claim to be a wife, and not just a mistress, Allie alleged that pillow talk between Sharon and herself had been overheard by her friend, hidden behind a bureau in the bedroom.

The witness called to testify was a young woman named Nellie Brackett. Nellie was a teen-age hanger-on and confidante of Allie’s. She related how Allie had hidden her behind a bureau, thinking it would only be for a few minutes, but the senator came in and persuaded Allie to stay the night in his bed. Nellie was trapped for hours, but according to both Allie and her young friend, she had heard the senator call Allie his dear little wife. 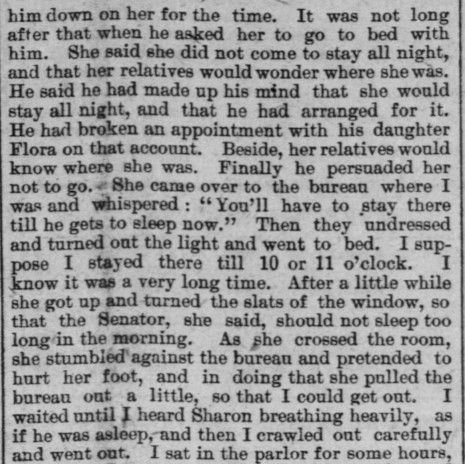 Nellie gave her testimony in March 1884. By 1885 she had recanted. Allie put her up to it, she declared. True or false, it is quite the bedroom farce, and provoked much mirth among the reporters.

The Brackett Behind the Bureau, a vignette from the cover of the satirical magazine The Wasp,