The Wasp was a satirical weekly published in San Francisco from 1876 until 1941. Its editor from 1881 to 1885 was that acerbic wit, Ambrose Bierce. Here is the cover of the magazine for May 17, 1884. At this point the divorce trial was in full swing, the case having begun on September 8, 1883 with William Sharon’s arrest for adultery. The Wasp showed the players “Anno Domini 1910” — what they would look like if the trial dragged on for another 26 years. 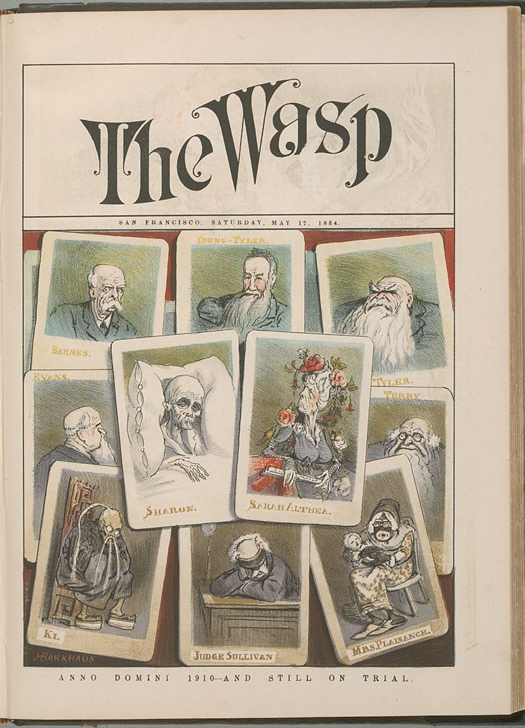 Central in the cover are William Sharon, looking like a skeleton, and Sarah Althea, bedecked with roses. She was known for the elaborately fashionable costumes she wore in the courtroom. At upper and middle left are Sharon’s two attorneys, William Barnes and O.P. Evans. Top and middle right are G.W. Tyler and David Terry, attorneys for Sarah Althea, along with Tyler’s son, “Young Tyler,” top center.

Across the bottom are Ki, Sharon’s Chinese manservant, Judge Sullivan, sound asleep, and Mrs. Mary Ellen Pleasant, here labeled Mrs. Plaisance. The newspapers invariably  referred to her as Mammy Pleasant, although she detested that nickname. She was a successful San Francisco businesswoman, and was frequently in the courtroom as a friend and supporter of Allie. She was also a handsome woman who did not look anything like this caricature. But this kind of casual racism was what you got in 19th century journalism.