A Few Last Notes on Sarah Althea, Sharon, and Terry

I hope you have enjoyed reading the many parts of the scandalous saga of William Sharon and Sarah Althea Hill. I’d like to add just a few other notes to the story—

There is a short street in San Francisco named for William Sharon. It runs between 15th and 16th, just off of Market Street.

Sarah Althea Terry is buried next to her husband, David Terry, and his first wife Charlotte, in the Stockton Rural Cemetery. The age is wrong on her tombstone. She was not 80 at her death, but 87. 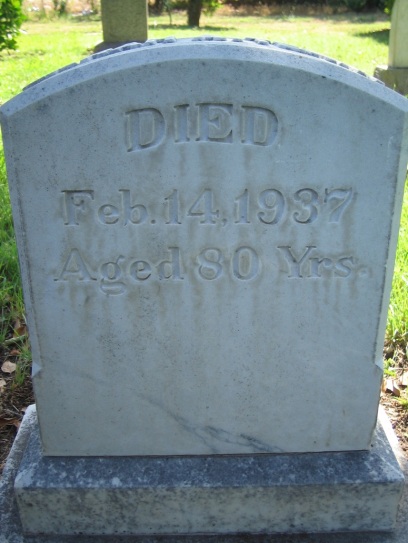 Her name is across the top, and her age is wrong.

William Sharon’s rather unusual table-style tombstone can be found at at Cypress Lawn Memorial Park in Colma, California, the cemetery city of San Francisco.

I took my information from the book Sarah & the Senator, by Robert H. Kroninger (1964) and newspaper articles accessed at the California Digital Newspaper Collection. The legal case is well set out by Mr. Kroninger, himself an attorney and judge, but it had so many bizarre twists and turns, and spun off so many side actions, that my un-legally-trained mind had difficulty following it all. I stuck to the more sensational aspects of the trials — pistols in the courtroom and love potions in the coffee.

This story has also been turned into a novel, The Devil’s Daughter, by Eleazar Lipsky (1969). According to a review that appeared in the ABA Journal for January 1970 (which I accessed at Google Books) it is a fictionalized treatment of the “fabulous series of cases” arising from Sarah Althea’s claim against Senator Sharon. Lipsky adheres closely to the narrative of the cases, leaving out most of the legal technicalities and changing all the names. At 633 pages, I think I can skip that one.

Sarah Althea’s story would make a great novel though. Just imagine what Tolstoy or Thomas Hardy could do with such a fascinating woman and the larger-than-life men she knew. Her brilliant beginning, her tortuous pathway through the courts of law, her tragic end.

Not to mention little Nellie Brackett behind the bureau, faithful Oriental servant Ki, the mysteriously influential Mrs. Pleasant, and a small brigade of fortune-tellers, charm-workers, attorneys (weaving their own kind of spells), and judges. And behind it all, old San Francisco in its glory days.

Nancy is a retired librarian who lives in Chico, California. She is the author of John Bidwell: The Adventurous Life of a California Pioneer.
View all posts by nancyleek →
This entry was posted in Sharon v. Hill. Bookmark the permalink.