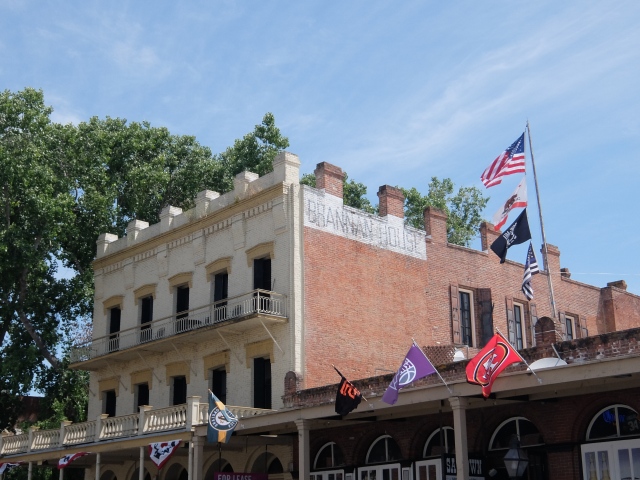 Old Town Sacramento is a fun place to visit, even if it is full of junky tourist trap shops. Jim and I went there today to take the Sacramento History Museum‘s Underground Tour.

Eugenie outside the Stinking Tent saloon

Our guide on the tour was “Eugenie Dumas Hunt,” a real person portrayed by a young woman who did an excellent job of impersonating a young French lady of the mid-19th century. (Even if her charming French accent did have a tendency to come and go.)

Very little is known (as far as I can tell) about the real Eugenie, except that she ran the Hotel de France and Restaurant, made a pile of money doing it, married William Hunt, had three children, and is buried in the old Sacramento Cemetery.

About two-thirds of the tour is above ground, looking at the river and the old buildings, while the guide explains the sequence of buildings built of sticks and canvas, then wood, and then brick. Next it’s into the basement of two buildings (no photography allowed underground) to see how the buildings were jacked up and new foundations put underneath.

The entire downtown was raised 9 feet. The process took 13 years.

It was a costly business, and if you didn’t want to pay to have your building raised to street level, then you could take the other option: allow your three-story building to become a one story structure. That explains the difference you may see between buildings on the street.

Raising the streets and buildings was only one part of a three-pronged effort to prevent future flooding. The other two solutions were build higher levees and divert the American River. I knew about raising the city and building levees, but I didn’t know that they had also moved the confluence of the Sacramento and American Rivers a mile upstream. I’d show you a map if I could find one.

Some archeological digging has been done under the buildings, and on display inside the underground rooms are some of the artifacts found: combs, bottles, chinaware, various implements, and a set of  weighted  “cheater’s dice.”

It was a fun tour and I recommend it to anyone interested in the history of old Sacramento. And if you are wondering why they built a city on a spot so prone to flooding year after year, blame Sam Brannan. But that is a tale for another time.