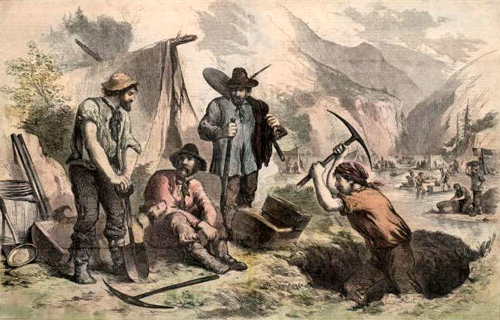 Nearly every account of any man who came to California to get rich mining for gold will say that after a few months, or weeks, or days in the goldfields the fellow gave up the attempt and turned to “mining the miners” as a storekeeper, lawyer, doctor, teamster, or just about anything else that didn’t involve standing in an ice-cold creek or shoveling dirt all day. But some miners did stick to it, and some made money at it, and not all of them lost their gold to card sharps and loose women.

Horace Snow was one of those men, along with his brother Hiram and their partner Charles Spear. Horace rejoiced in telling his friend Charlie about his financial progress. He had come to California owing money to his brother and to a Mr. Plympton who had loaned him the money to attend the Normal School in Massachusetts. He owed these and other men $267 when he came to California: “Wasn’t that a pretty little sum to accompany a poor, unsophisticated person into such a dissipative country as this?”

But after a year and half he could boast that he had cleared all his debts. Moreover, he had sent

$50 to Father, $12.50 to Sister, and furthermore, have got $100 at interest, besides owning one half of a good Cabin and cooking utensils, one half of three claims, the same interest in a good stock of mining tools . . . Now Charlie, I don’t wish to be boisterous or ungentlemanly, but let us throw off a little of our superfluous hilarity and give three cheers for Snow. Therenow, HURRAH! HURRAH!! HURRAH!!!