Even more than President Lincoln, John Bidwell wanted to meet General Ulysses S. Grant. It took some wrangling to get a pass from Edwin Stanton, the Secretary of War, but Bidwell got it, and then he hurried off to meet Grant where he was engaged in one of the bloodiest battles of the war, the Battle of Cold Harbor.

I started on the 11th of June for the Army of the Potomac. Embarking in the Government Mail Steamer at Washington, we descended the Potomac to Chesapeake Bay; thence to the month of, and up York River to the Pamunky; and up the Pamunky to the While House, which was at that time the base of supplies for the army. Fifteen miles over a dusty and uneven road perfectly lined with transportation wagons and troops, took me to Lieut. Gen. Grant’s headquarters, near Cold Harbor, which is about nine miles from Richmond. . . .

Gen. Grant is a man of medium, or a little less than medium stature, possessing regular but by no means imposing features, whiskers inclined to be sandy, blue eyes, hair light brown, and artless and modest in his deportment. Nothing of pretension or ostentation about him. I was informed by members of his staff, who all seemed ardently attached to him. that he would not tolerate anybody about him who put on airs. Everything went to show that he is a plain, practical man. One so wholly unassuming could never rise except by real merit.

The composure and coolness of the man were truly indescribable. It seemed as if nothing could ruffle him or throw him off his balance. To see a man quiet and undisturbed in a country village or at his own fireside would be nothing remarkable. But to see him most perfectly so under the responsibilities of a vast army, in the presence of a powerful and desperate foe. and just on the eve a grand movement. an entire change of base, is indicative of more than common powers. His very looks inspired me with hope and confidence. 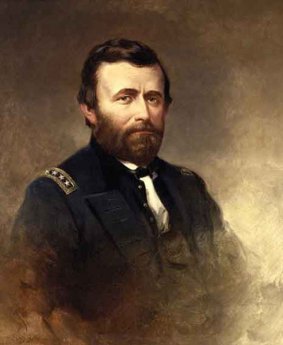 I was anxious to know if the Army of the Potomac was properly sustained by the government. and in answer to my inquiry, if he was supplied with everything he needed. Gen. Grant said he had “plenty.” I then asked “have you plenty of men?” He answered “plenty.”

“There is then,” said I, “no doubt about the result of this campaign. I hope?” Said he, “I can whip Lee with one hand tied.” The same confidence and spirit seemed to pervade the whole army, and my faith in the military ability of Gen. Grant, and the courage and endurance of his army, is such, that I can say to you, fellow citizens, in all confidence, that Richmond will be taken.