A Quick Visit to Rough and Ready 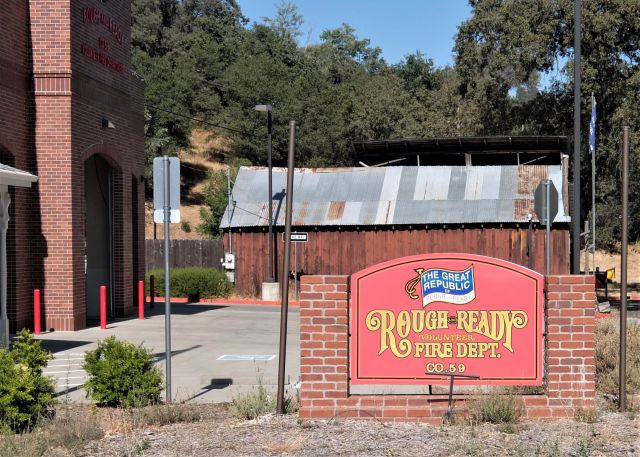 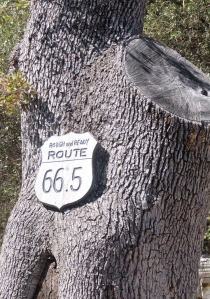 If you drive along Highway 20 from Marysville to Grass Valley, you see a sign that points left and says “Rough and Ready 2 miles”. I have meant to take that turn for a long time now, and last Friday I finally did.

The town of Rough and Ready was once a thriving mining community of over 3000 people. Now there are only a few hundred in the area, but they are an independent-minded bunch, and proud of their little town.

They have quite a sense of humor too. 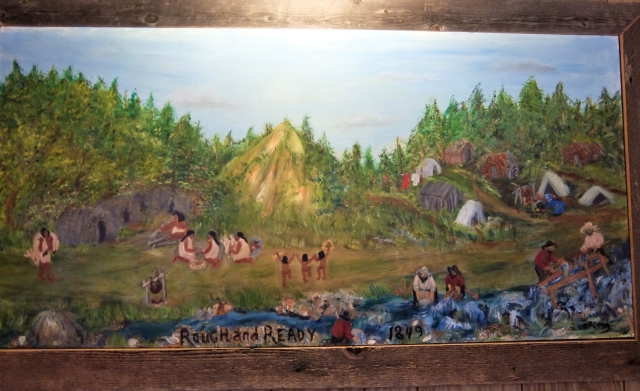 A copy of an original painting depicting Rough and Ready in gold rush days.

Rough and Ready got its name from General Zachary Taylor, known as “Old Rough and Ready.” The first settlers were a company of gold seekers from Wisconsin who arrived in the fall of 1849, led by Captain A. A. Townsend, who had served under Taylor during the Black Hawk War of 1832. Townsend’s company of 49ers was the “Rough and Ready” Company in honor of their leader and the President.

Discontent and disputation over a proposed mining tax and no government services led to an independence movement. On April 7th, 1850, at a mass meeting, the townsfolk voted to secede from the Union and declared itself the “Independent Republic of Rough and Ready.” Colonel E. F. Brundage was elected president of the new republic and a Constitution was written and signed.

Alas, the republic was short-lived. As July 4th approached, the miners began making preparations for the big day (and the 4th of July was a very big day at that time, the biggest and noisiest holiday of the year.) How could they celebrate the independence of a nation they had left? What was worse, as “foreigners”, they were running into refusals when they tried to buy liquor from nearby towns for the celebration. The independence movement was called off and Rough and Ready rejoined the Union, just in time to celebrate Independence Day.

Rough and Ready still has a few old buildings from the Gold Rush era. Mr. Weldon Travis, who stopped his pickup truck to see what we were doing, kindly invited us up to the grange hall to learn some history of the town.

The Secession Days Celebration takes place on the first Sunday in June (June 2, 2019.) Formerly it was the last Sunday in June. This is a family-friendly event with a pancake breakfast, chili cook-off, craft fair, blacksmith demonstrations, kids’ activities, and The Original Saga of Rough and Ready re-enactment melodrama. Go to Rough and Ready for a fun-filled day of history and excitement!

Nancy is a retired librarian who lives in Chico, California. She is the author of John Bidwell: The Adventurous Life of a California Pioneer.
View all posts by nancyleek →
This entry was posted in Rough and Ready, Uncategorized. Bookmark the permalink.