Sutter’s Fort stands at the center of California history. Here its biography, telling the  story of that iconic fort from the day John Sutter arrived at the spot in August 1839, through its building and its decline, to the State Park we know today in the heart of Sacramento. 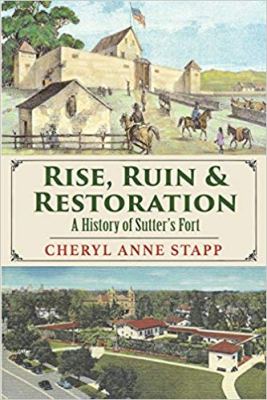 Cheryl Anne Stapp has given John Sutter and his iconic Fort their due regard in Rise, Ruin & Restoration: A History of Sutter’s Fort.  In this brief but detailed book she traces the history of the fort and the people who built it, lived in it, and restored it.

What was it made of? Who had the skill to build such an edifice in the wilderness? Are there eye-witness accounts of its early days? What happened to the fort during and after the gold rush? How did it rise from ruin? The author answers all those questions and more.

Names familiar and unfamiliar in California history are here, because everybody went to Sutter’s. John Bidwell, Nancy and Ben Kelsey, P.B. Reading, Lansford Hastings, John C. Fremont, Eliza Gregson, Sam Brannan, and many more — they all saw it and many of them wrote about it. 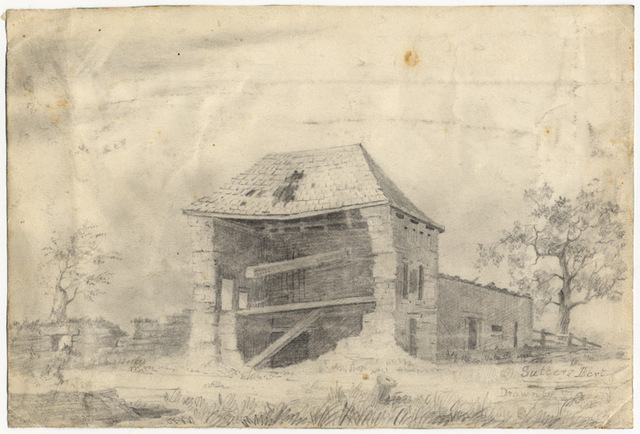 Sutter’s Fort in decline — a pencil drawing by W. Tyrrell done in 1855

I knew something about the fort’s early history, but what happened to it after Sutter left, and how it was restored, has seldom been touched on. The fort lay in ruins for many years, until the adobe walls melted back into the earth. Then in 1889 the city board of trustees decided to extend 27th Street from K to L Streets.

The cut-through would necessitate the destruction of the decaying Central Building, the only standing remnant of Sutter’s Fort. Within days of the trustees’ announcement, a patriotic and well-known Sacramentan named James G. Martine sent an open letter to the Sacramento Union addressed “To the Pioneers of the Pacific Coast.”  (p. 104)

The movement to restore the fort to its former glory was led by The Native Sons of the Golden West. But what did the original look like? Where exactly were the walls and the bastions? Old pioneers like John Bidwell were consulted, but the resulting restoration actually turned out to be a third smaller than the original.

Not until the Kunzel Map was rediscovered in 1958 did the restorers have an authentic ground plan for Sutter’s Fort. Published in an obscure German pamphlet in 1848 and filed away in the Bancroft Library ever since, the Kunzel Map is a ground plan sent by John Sutter himself to Dr. Heinrich Kunzel to promote German emigration to California. At last we have an accurate diagram of the fort and its attendant buildings.

Nancy is a retired librarian who lives in Chico, California. She is the author of John Bidwell: The Adventurous Life of a California Pioneer.
View all posts by nancyleek →
This entry was posted in Book Reviews, Sutter's Fort. Bookmark the permalink.