Another Brother to Brother Letter

Here is another letter from Thomas Bidwell to his brother. John Bidwell was still in San Francisco, recuperating from an illness. Thomas says he has been sick too — probably both of them suffered from malaria contracted while crossing the Isthmus of Panama.

The “opportunity offered” was someone going southward to carry the letter. There was no regular postal service to Rancho Chico in 1850. A letter would have to be posted in Sacramento. 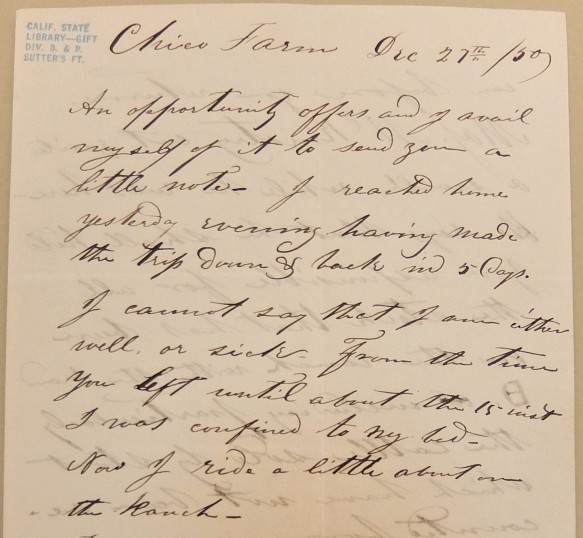 An opportunity offered and I avail myself of it to send you a little note. I reached home yesterday evening having made the trip down and back in 5 days.

I cannot say that I am either well or sick from the time you left until about the 15 inst. I was confined to my bed. Now I ride a little about on the ranch.

Before you come home, purchase if you can bring them, a pair of morocco shoes for Mrs. Alfred No. 7, also a pr of Morocco slippers No. 6 (small size), a few pairs of pants would sell well I think.

We want clothing for the boys. Shall I get out timber for a house? Let me know if you can before you return. Maj. McKinstry cut quite a swell while he was here. He says that he shall hold you responsible for all the stock that has been on the ranch with the brand B, including particularly the cattle sold by Stout which have not been accounted for.

Yours ever,  Thos. J. Bidwell

He is asking again for “clothing for the boys.” Bidwell supplied shirts, trousers, and shoes to his Indian workers to use while at work. They could wear whatever they wanted at other times, but for work they needed the protection of Western clothing.

The house he is thinking of building is the two-story adobe. In 1850 all Bidwell had was a log cabin, and that must have been inadequate. It would burn down from an Indian attack in 1852.

John Bidwell and George McKinstry had been business partners in 1848-49, supplying goods to the miners at Bidwell’s Bar. They don’t seem to have gotten along very well after that. They argued over which cattle on the ranch belonged to whom, as evidenced by this letter six weeks later from McKinstry to Bidwell.

Sir,  I hereby give you notice that if you continue to kill or sell the stock (and appropriate to yourself the proceeds thereof) on the Ranch “Arroyo Chico” situated in Butte County, of which stock I am the one half owner I shall hold you personally responsible for the value of the same.