Thomas Bidwell, studying at St. John’s College in New York, says he wrote often to his brother John, but got few letters in return. Unfortunately, what few letters John Bidwell did write have been lost, so all the news we have of Rancho Chico is second-hand. This letter tells us of an exciting incident that happened in the summer of 1852, when John Bidwell went on an expedition to recover stolen cattle.

Your letter dated San Francisco Apr. 7 reached me yesterday morning. This is only the 2nd or 3rd that I have received from you since I left California. I have written very often notwithstanding.

I have of late felt very uneasy about you. About the 1st of Sept. it was stated in the Herald that the Indians from the mountains above your house had come down to drive off some of your cattle, that you had mustered what men you could, pursued them, killed a good number, & recovered your cattle again, but that Frye was killed. Is all this true? Poor Frye! he was a good fellow. 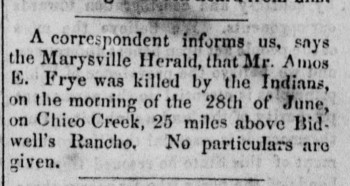 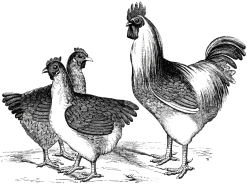 From your letter I learn that Barber is still with you. I suppose his ardor for the welfare and increase of the chickens & sheep is not cooled. You must by this time have an immense number of fowls. Did the two pigeons that Capt. Sutter gave me, do well?

There is no news of any importance afloat that will not reach you much sooner by other means than by letter.

The last news I had from home – all were in good health, except mother who it seems is gradually declining, as it is quite natural that she should at her age – for she is not far this side of 80.

Wesly [husband of their sister Laurinda] built a very good house. He did talk of coming on to N. York to see this part of the country however he has not yet come.

Write soon, I am very busy and have not much time to write and even when I have I find it a dry tasteless job. What can you expect from a college? A place above all others most destitute of news.

My respects to all with whom I was acquainted especially Barber, Frye (if alive).

Anxiously awaiting another letter from you

I remain ever your most affectionate Brother, T. J. Bidwell

Amos E. Frye was born in 1808 or 1809, making him ten years older than John Bidwell. He had traveled with the Bidwell-Bartleson Party in 1841, but had turned back when they reached the Rocky Mountains. He was a valuable and respected employee, as Thomas Bidwell mentioned in other letters.

Frye was the first man buried in Chico Cemetery. The exact location of his grave is unknown, but is probably somewhere along the southwestern border of the cemetery.

According to newspaper reports, he was part of Bidwell’s expedition to arrest two Indian men who had stolen five head of valuable cattle. As the group lay in wait at dawn, someone fired a gun, and the element of surprise was lost. In the ensuing battle Amos Frye lost his life, as did eleven Indians. Many years later Bidwell told his wife Annie that Frye was “shot in artery and died instantly . . . had to bring him on a horse & he was the 1st man buried in Chico Cemetery.”

Nancy is a retired librarian who lives in Chico, California. She is the author of John Bidwell: The Adventurous Life of a California Pioneer.
View all posts by nancyleek →
This entry was posted in Amos Frye, Thomas Bidwell, Uncategorized. Bookmark the permalink.