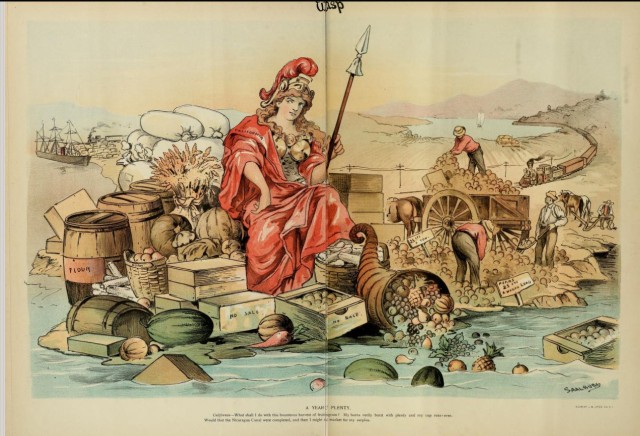 I like these cartoons that feature California as a goddess in all her glory, so here is another one. This one shows California looking peeved. What has her so exasperated?

A YEAR OF PLENTY: California — What shall I do with this bounteous harvest of fruit and grain? My barns verily burst with plenty and my cup runs over. Would that the Nicaragua Canal were completed, and then I might find market for my surplus.

You might wonder about the idea of a canal through Nicaragua, but it was an idea afloat at the time. 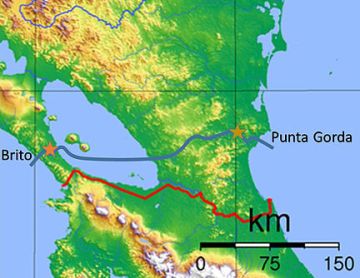 The Nicaragua Canal route, from Wikipedia

There had been talk of a canal to link the Atlantic and Pacific Oceans during most of the 19th century. The French began a canal across the Isthmus of Panama in 1881, and after great expense of lives and capital, gave up the project in 1894 when it went bankrupt. This cartoon appeared in the Wasp in 1891, when U.S. interests were speculating about beating the French across by taking a different route.

Instead, the U.S. took over the French project in 1903, after promoting a revolution in Panama that brought about its separation from Colombia. The Panama Canal was completed in 1914. 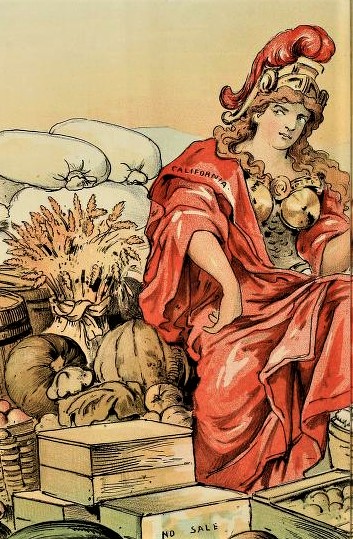 California also had the transcontinental railroad as a means of getting her produce to eastern markets, but the railroad wasn’t enough. California was (and is) so bountiful that she needs a vast transportation web to distribute the fruit of her fields.

This cartoon was by Charles W. Saalburg. You can read about his career here.

Nancy is a retired librarian who lives in Chico, California. She is the author of John Bidwell: The Adventurous Life of a California Pioneer.
View all posts by nancyleek →
This entry was posted in Uncategorized, Wasp. Bookmark the permalink.