Here you have a cartoon showing a fat “Sacramento Farmer” beating down the poor “Hydraulic Miner” with his club of “Unreasonable Prejudice.” Uncle Sam is about to step in, saying, “See here, Rusticus, drop that [word lost in the gutter] and fight fair or I’ll take a hand in this little scrimmage myself.”

As much as I like the work of the cartoonist, Charles Saalburg, this is hardly an accurate depiction of the situation.

Placer mining (i.e., surface and stream mining) soon gave way to more aggressive ways of getting at the gold and the red-shirted independent miner became a figure of former times. Hydraulic mining was not something done by the lone miner or a small group of pals. It took a serious investment of capital and organization of technology to get at the gold, and the payout could be enormous.

We have a fine example of the remains of hydraulic mining here in Butte County at Cherokee. Another even larger land scar can be seen at Malakoff Diggins State Historic Park. Vast quantities of earth and rock were blasted from the mountain face by powerful water cannons, known as monitors. 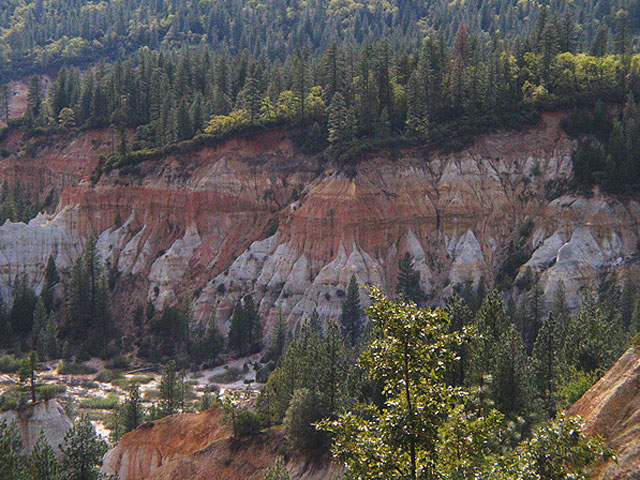 The Diggins at Malakoff

At the same time, farming was a vital and growing part of California’s economy, and “slickens” from the mines were devastating fields and orchards. The first lawsuit brought by a farmer against a mining company, Crum v. Spring Valley Mining Company, pitted Butte County farmer A.J. Crum against the mine at Cherokee. Crum sued in 1872 after he found four feet of mud smothering his peach orchard.

A.J. Crum lost his suit. The jury found, among other points, that

To its credit, the Spring Valley Mining Company at Cherokee mitigated the damage it caused by building a canal to carry water from the mine away from the farms. It also offered to buy damaged farmland, and built a dam to capture debris and silt from the mining operations. It was the only company in California to do so.

In 1882 farmer Edward Woodruff filed suit against the North Bloomfield Gravel Mining Company for damage to his fields. Judge Lorenzo investigated and deliberated for two years. The Sawyer decision of 1884 brought an end to the heyday of hydraulic mining and is considered California’s first environmental law. And yet the argument was still going on in 1892, when the Wasp published this cartoon.

I took the information about hydraulic mining here from Ron Womack’s introduction to The Road to Cherokee, a book published by ANCHR in 2016.

Nancy is a retired librarian who lives in Chico, California. She is the author of John Bidwell: The Adventurous Life of a California Pioneer.
View all posts by nancyleek →
This entry was posted in ANCHR, hydrulic mining, Wasp. Bookmark the permalink.