Every day for a week or more, wagons arrived with the same object in view. At last we took steps to see how many had arrived and found our numbers to be sixty-nine. Among those were about fifteen women and children. All were anxious for a start. (1877 Bidwell Dictation)

For the next few days, one or two wagons would come each day, and among the recruits were three families from Arkansas. Every one furnished his own supplies. The party consisted of sixty-nine, including men, women, and children. (The First Emigrant Train (Echoes of the Past))

They were mostly young single men, like John Bidwell and Michael Nye. A few older men, like George Henshaw, and middle-aged John Bartleson, who became captain of the wagon train. 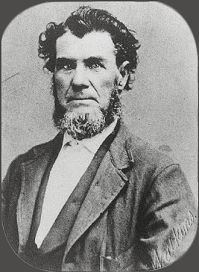 There were actually four Kelsey brothers on the journey — the other one was Andrew.

Lucy Kelsey’s sister, a widow named Mrs. Gray and her child were also part of the group. Mrs. Gray would find a husband along the way as well.

That doesn’t add up to fifteen women and children, but I don’t think Bidwell was paying close attention to how many children there were. He just remembered a passel of little kids.

1 Response to The Bidwell-Bartleson Party Gathers