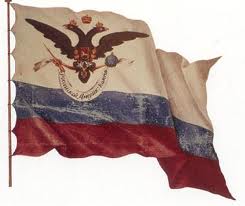 Flag of the Russian-American Company

If Dmitry Zavalishin’s colonial visions had come to pass, Northern California would be New Russia, not the State of Jefferson or any other part of the United States. It’s pretty hard to imagine, but he certainly used all his charm and powers of persuasion to try to make it a reality, and how different California’s history would be if he had succeeded!

Writing some 40 years after his visit to California, he still regrets that Imperial Russia did not seize the opportunity. Even without its well-known mineral wealth, it was a prize to be sought after.

The superior climate, rich soil, and capital location on the Great Ocean, with one of the best ports in the world [San Francisco], constitute the unalterable and inalienable advantages of California, and from this naturally sprang the desire to expand our colony of Ross at least as far as the northern shore of San Francisco Bay and the Sacramento River, and to that extent it was still possible.

He believed that “California’s subjection to Russia would have brought mutual and considerable advantages.” He was sure, from his conversations with the Mexicans in California, that Mexico’s neglect of its northernmost province would make it easy for Russia to expand its foothold. Mexico was weak, it had no navy to defend California, and the Californios were dissatisfied with Mexican rule. They seemed amenable to a pact with the Russians to protect them from the Americans, who it was feared would seize their lands without compensation.

In their eyes the Americas were heretics, and the specimens of United States citizens that they had come to know–adventurers and petty traders–had done little to recommend their nation. . . . As they themselves realized, almost the only means of deliverance from the terrible danger and at the same time from their disastrous situation was union with Russia.

And so Zavalishin envisioned a colony (led by himself he hoped), that would stretch from the northern shores of the San Francisco Bay to the 42 ° parallel (the Oregon border).  It would have Russian farmers, a school, a doctor, and friendly relations with the Indians. It would give Russia a magnificent warm-water port and a firm foothold in North America.

Alas for Dmitry, it was not to be. Many years later, after the Mexican War, the Gold Rush, and the annihilation of the Indians, he remembers the Californios who welcomed him so cordially, and writes,

I am sure in the light of everything that has happened, they often remember how much better it would have been if, instead of the events that occurred, our mutual proposals and desires had been realized at that time.

(Quotations are taken from California through Russian Eyes, 1806-1848)

Nancy is a retired librarian who lives in Chico, California. She is the author of John Bidwell: The Adventurous Life of a California Pioneer.
View all posts by nancyleek →
This entry was posted in Dmitry Zavalishin, Russian American Company. Bookmark the permalink.